This year too, noise norms flouted during visarjan

The saving grace was that celebrations were less noisy this time around than last year when noise levels reached 119.8 dB. 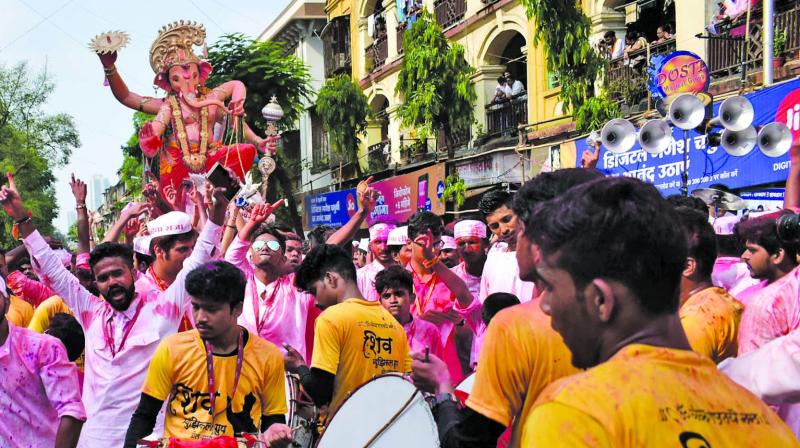 Devotees take a giant idol of ‘Ganesh Galli’ through the streets to immerse in the sea. (Photo: Debasish Dey)

Mumbai: Despite the ban on DJ systems during Ganpati processions and in pandals, noise norms were violated during celebrations in major areas even as decibel levels crossed the 100dB mark. Santacruz was the noisiest at 113.9 dB, as per the readings by Awaaz Foundation, which works to create awareness about noise pollution in the city. The saving grace was that celebrations were less noisy this time around than last year when noise levels reached 119.8 dB.

Even when no DJ systems were used by the mandals, traditional instruments such as drums and banjos, amplified with loudspeakers, caused noise levels to soar. “The police was observed measuring decibel levels at most locations. DJs were absent from the processions. Although no instruments were allowed post 12pm at Girgaum Chowpatty, political party mandals continued to use loudspeakers beyond 1am in the presence of the police,” said Sanjay Salunke, member of the Awaaz Foundation.

In the last two years since 2016, noise levels were the lowest this year during Ganesh immersion. Still, on the last day of visarjan, places such as Khar Linking Road, Juhu opposite SNDT University, Sion Circle, Koliwada, Matunga and Worli recorded noise levels more than 100dB, which were way beyond permissible limits as per the Noise Pollution (Regulation and Control) Rules, 2000.

“We are further gathering data from various places on those who violated the ban on the last day. The list will also be given to the MPCB (Maharashtra Pollution Control Board) and accordingly, action will be taken,” said Manjunath Shinge, deputy commissioner of police (operations) and Mumbai police spokesperson.