The NCP emerged as the third-largest party in the state, relegating the Congress to the fourth position. 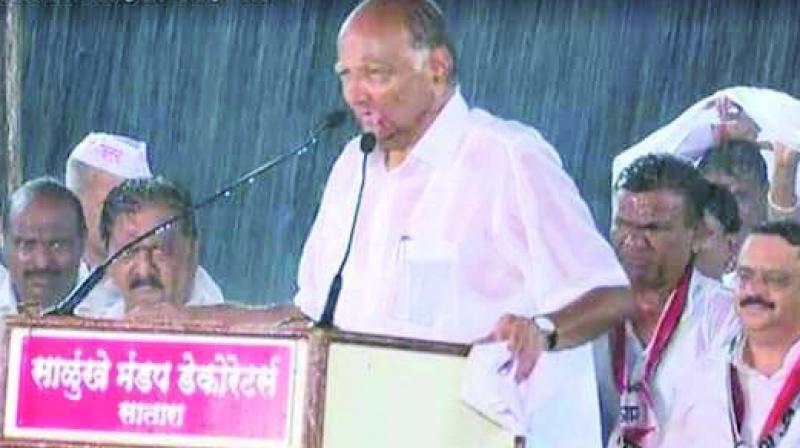 A drenched Pawar delivers an impassioned speech at a rally.

Mumbai: When the campaigning began for the Lok Sabha polls, the chances of Sharad Pawar-led Nationalist Congress Party (NCP) was all but written off by poll pundits. Badly hit by a series of defections, it was expected that NCP’s performance would hit rock bottom in the Assembly polls. However, the party rose like a phoenix from the ashes and surprised everyone by winning 54 seats.

Moreover, upping its 2014 tally of 41, the Pawar-led NCP overturned the power equation with "big brother" Congress, which was ahead in 44 seats.

In what could be termed as a sweet revenge, the NCP also won the Satara Lok Sabha bypoll, with the party’s candidate Shriniwas Patil defeating Bharatiya Janata Party’s Udayanraje Bhosale, who had left the NCP just four months after being elected as a Member of Parliament.

The credit for the revival of NCP’s fortunes goes to its 79-year-old party chief Sharad Pawar, who single-handedly ran the party’s campaign, notwithstanding his poor health.

The CM had targeted the NCP chief by mocking him over the defections in his party. “Mr Pawar says he is the president of the wrestling association and he has groomed many wrestlers. Then why all wrestlers are leaving him? Nobody wants to stand by you,” he had said.

With NCP’s impressive performance, Mr Pawar has shown who is the real ‘Pehelwan.’ The election will be remembered for the fight put up by him, said senior journalist Rajendra Thorat.

The NCP’s strong comeback also prompted jokes on social media, which emphasised the charishma of Mr Pawar. One of the jokes reads as follows: Unhe karna tha 220 paar, lekin bich me aa gaye Sharad Pawar.” (They wanted to cross 220 seats, but Sharad Pawar came in between their ambition).

Mr Pawar has been a defence minister, Opposition leader in the Lok Sabha and three-time Maharashtra chief minister in a career spanning 52 years.

He was a member of Maharashtra Legislative Assembly and the Lok Sabha for seven times each.

Mr Pawar, a former Congress leader, shot to fame in 1978 when he dislodged the then Vasant Patil dispensation in the state to form a government with the Janata Party. At 38, he became Maharashtra's youngest chief minister — an unbroken record.

Mr Pawar served as defence minister from June 1991 to March 1993. The veteran leader parted ways with the Congress in 1999 over party president Sonia Gandhi's foreign origin issue and formed the NCP in the same year. The Congress and NCP came together following the 1999 Assembly election in Maharashtra to form government in the state. Mr Pawar became Agriculture minister in the Manmohan Singh
government.