Mr Thackeray will offer prayers to Ram Lalla in Ayodhya and perform “aarti” on the banks of the river Sharayu, Mr Raut said. 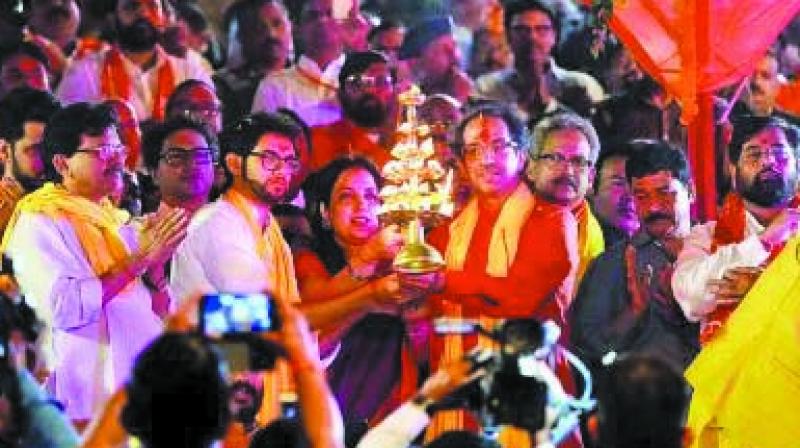 Mumbai: The day chief minister Uddhav Thackeray will visit Ayodhya has been finalised. The Shiv Sena chief will visit the holy city on March 7 to mark completion of his government’s 100 days in power. Senior Sena leader Sanjay Raut announced that all arrangements have been made for the CM’s visit to Ayodhya on March 7. “Ayodhya mein jallosh! March 7, 2020,” Mr Raut said in a tweet.

Mr Thackeray will offer prayers to Ram Lalla in Ayodhya and perform “aarti” on the banks of the river Sharayu, Mr Raut said. “Thousands of Shiv Sainiks from across the country will also visit Ayodhya. It is a matter of faith for us and one should not bring politics into it,” said the Sena MP.

When asked about the BJP’s criticism that Mr Thackeray should take along Congress leader Rahul Gandhi to Ayodhya, Mr Raut said that the Congress and NCP leadership had welcomed the Supreme Court verdict on the Ram temple issue.

“Congress interim president Sonia Gandhi, former president Rahul Gandhi and NCP chief Sharad Pawar welcomed the Ram Mandir verdict. I have heard that they are also of the opinion that the Ram Mandir should be constructed. Hence, one should take proper information and then speak,” said Mr Raut in reply to the BJP’s criticism.

Mr Raut had announced Wednesday that the CM would soon visit Ayodhya. Interestingly, the party also invited its alliance partners – NCP and Congress – to join the CM in his visit.

Mr Raut said, “Maharashtra CM Uddhav Thackeray will visit Ayodhya on the completion of 100 days in power to seek the blessings of Lord Ram. We want that our alliance leaders should also come along. Rahul Gandhi also visits several temples.”

Mr Thackeray last visited Ayodhya in June 2019 and offered prayers at the makeshift Ram Lalla temple along with 18 newly-elected MPs of his party.

This will be the Sena chief’s first visit to Ayodhya since his party severed ties with the BJP and NDA over sharing of power after the results of the Vidhan Sabha polls were announced last year. According to political sources, the move is seen as an attempt to allay doubts in the minds of the Sena’s hardcore supporters that the party is deviating from its Hindutva agenda after coming to power.

Earlier, Mr Thackeray put off his November 24, 2019 visit to Ayodhya after the NCP core committee resolved to form an alternative government in the state. The Sena subsequently joined hands with the NCP and Congress to form a coalition government. Mr Thackeray was sworn in as the CM on November 28, 2019.