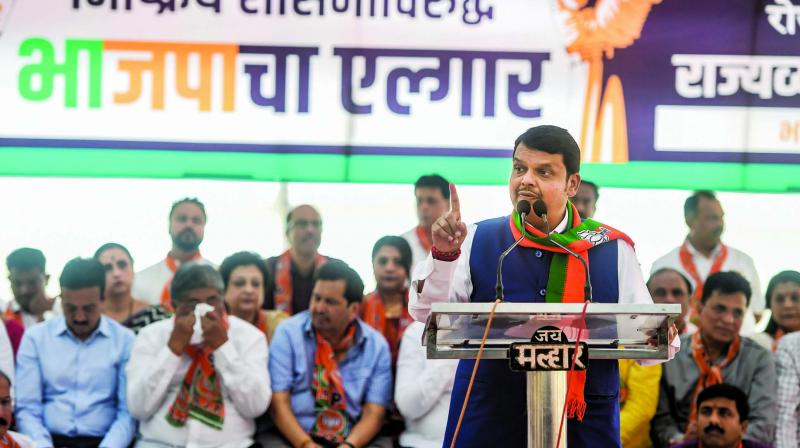 Mumbai: The Bharatiya Janata Party (BJP) on Tuesday held statewide protests against the Maha Vikas Aghadi (MVA) government over the farm loan waiver and atrocities against the women in the state.

Former chief minister and Leader of Opposition  Devendra Fadnavis said that the MVA government had announced the loan waiver scheme for 35 lakh farmers in the state. However, after two months it has prepared the first list of beneficiaries that includes only 15,000 farmers.

“If they move at the same pace, it will take more than 400 months to cover all 35 lakh farmers,” Mr Fadnavis said, adding that there was no incentive for farmers who have repaid their loan on time.

Mr Fadnavis said that the farmers, who have been affected by unseasonal rains, have been promised Rs 25,000 but they have not been paid a single penny.

State BJP chief Chandrakant Patil said that his party held protests at around 355 places across the state. “More than 2.5 lakh people have participated in the protests,” he said.

In Mumbai, the party organised a protest at Azad Maidan, which was attended by over eight thousand people, including legislators. Speaking with the reporters at BJP state headquarter, Mr Patil said that the MVA government has not paid even single rupee more than what the previous Devendra Fadnavis-led go-vernment had announced for the farmers affected by unseasonable rains.

He alleged that chief minister Uddhav Thackeray was not serious over issues of the farmers, as he left the House within ten minutes.

Over the farm loan, he said that the waiver scheme is meant for the crop loans. While announcing the scheme, the government had stated that it would waive all types of loans. “82 per cent farmers have loans up to Rs 22,000 to Rs 42,000,” he claimed.

“Once the list of beneficiaries is declared, one would come to know that there would be no one who has availed loan worth Rs 2 lakh as 82 per cent of farmers in the state have less than 2.5 acres of farmland. Apart from the crop loan, what would happen with other loans?” he asked.