Claim neither court nor government took action against colleagues’ assailants. 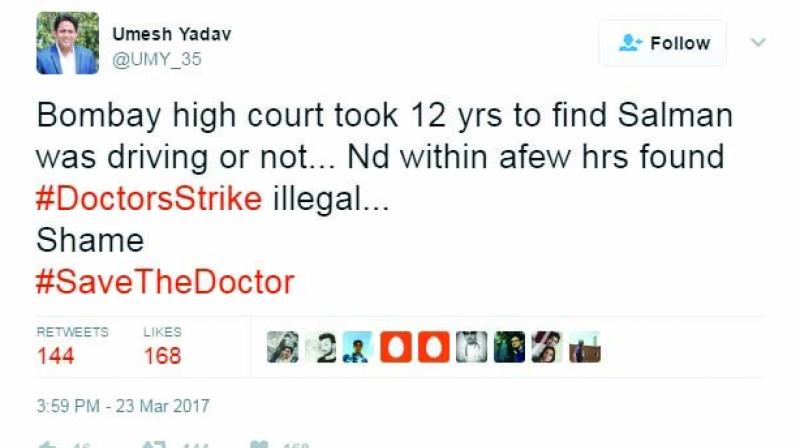 Mumbai: The state’s resident doctors may have resumed duty late on Friday night in the wake of the Bombay high court’s rap and chief minister Devendra Fadnavis’ warning, but some of them took to microblogging site Twitter on Saturday to slam the high court and Mr Fadnavis.

The angry doctors tweeted that neither the court nor the government had taken any action against their colleagues’ assailants in spite of repeated cases. Doctors questioned whether the high court judges themselves were harassing victims and supporting the criminals.

Nearly 4,000 resident doctors were on strike from Monday to Friday evening, demanding enhanced security in the wake of a string of attacks on their colleagues by patients’ relatives at government hospitals across the state. However, the high court on Friday asked the doctors to resume duty by Saturday morning at the latest.

Umesh Yadav, claiming to be a doctor, had tweeted, “The Bombay high court took 12 years to find Salman Khan was driving or not but within few hours founds doctors strike illegal(sic).”

Another, person named Dr Suraj Thakuriya tweeted, “Million of cases are pending in court for years. If they cannot give decision on time, they are not fit for the profession (sic).”

The high court on Friday had said, “We listened to doctors on Thursday and understood your problems, showing sympathy to you (doctors). We directed the hospital management not to take punitive action against you, but still you have not withdrawn the strike and have taken undue advantage of sympathy.”

Meanwhile, Sagar Mundada of Maharashtra Association of Resident Doctors (MARD) said, “Initially a few doctors had taken to Twitter, following the high court’s ruling. But we as an organisation do not share the opinions expressed by individuals on Twitter. Our view is clear and we have said that in court that were are resuming duty and we hope the government will fulfil our demands.” Meanwhile, resident doctors have demanded that attacks on them be made non-bailable offence. After protests in 2010, the state had framed the Doctors Protection Act, 2010 but the doctors have claimed it has never been used.