The CM thanked the PM and Ms Irani for handing over of the land to Maharashtra. 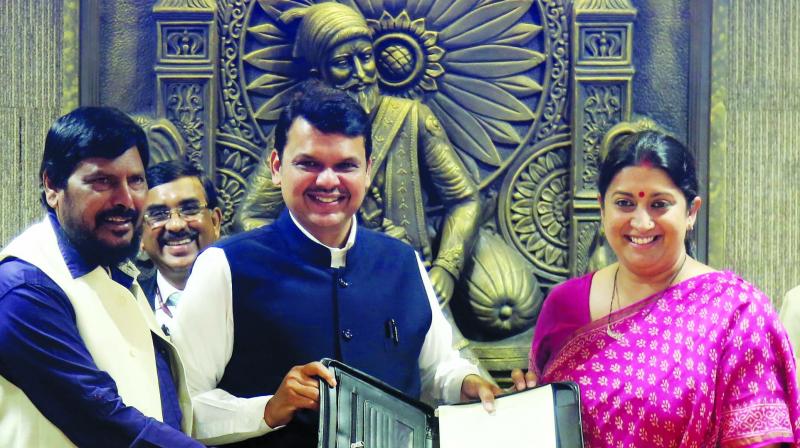 Mumbai: Ahead of Dr Babasaheb Ambedkar’s birth anniversary on April 14, Union minister Smriti Irani handed over Indu Mills land to chief minister Devendra Fadnavis at Vidhan Bhavan on Saturday to build the memorial to the architect of the Constitution. Prime Minister Narendra Modi had laid the foundation stone for the memorial in October 2015 after which the transfer was held up due to conditions laid by the National Textile Corporation (NTC).

The CM thanked the PM and Ms Irani for handing over of the land to Maharashtra. Mr Fadnavis reiterated the government’s commitment towards building the memorial. Ms Irani said, “We have seen the CM and people of Maharashtra’s efforts for this memorial. We are glad that this dream will come true now.”

The land agreement was held up as the National Textile Corporation, which possessed the land was not ready to transfer it over a cost issue and wanted to use transferable development rights (TDR) within the island city, which is not permissible. The state government has given TDR to the NTC in lieu of Rs 1,400 crore, the land price.

The Indu Mills land is located at Shivaji Park, Dadar in central Mumbai and is spread over 5.23 lakh sq. ft. The sea-facing plot falls under the Coastal Regulatory Zone and the market value of the plot in the area is around Rs 30,000 per sq. ft. The state has offered Rs 1,413 crore for the plot where the Dr Ambedkar memorial will be set up. Mr Modi had laid the foundation stone for the memorial in October 2015.