Suspension of MLAs may be revoked

Initially, a few MLAs’ suspension would be revoked and then later the suspension of remaining MLAs will be withdrawn, sources said. 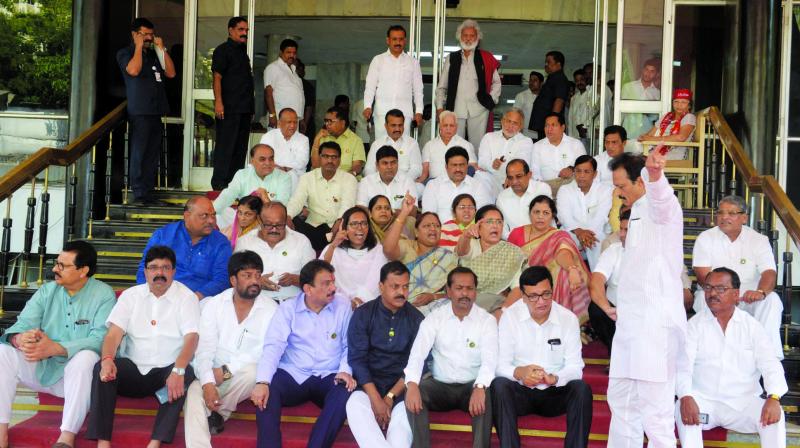 MLAs from Congress and NCP protest on Saturday over the issue of suspension of 19 Opposition MLAs and the farmer loan waiver.(Photo: asian age)

Mumbai: The state government is likely to revoke the suspension of 19 MLAs of the Congress and the Nationalist Congress Party (NCP) next week. However, the opposition parties have decided to boycott the ongoing proceedings of the legislature until the end of the budget session.

In a bid to end the deadlock, the Bharatiya Janta Party (BJP) held a meeting with opposition parties’ leaders. However, the bid to pacify Congress and NCP failed, as the opposition parties stuck to their demand, saying that the suspension of all the MLAs should be revoked.

The BJP was not ready initially to accept the opposition’s demand. However, the sources in the BJP said that the leadership has stated that it will revoke the suspension next week. Initially, a few MLAs’ suspension would be revoked and then later the suspension of remaining MLAs will be withdrawn, the sources said.

Parliamentary affairs minister Girish Bapat appealed to the Congress and the NCP in the assembly, urging them join the proceedings of the house. “The opposition members are not attending the house; their benches are empty. This is not good for democracy. We have held meetings with the opposition members and told them to join the house. The MLAs were suspended for some reason. We are still ready to talk to them,” he said.

However, leader of opposition in the assembly Radhakrishna Vikhe-Patil said that the party was firm on its stand of boycotting the budget session. “The suspension was illegal. The government will have to revoke it. We are going to start Sangharsh Yatra from next week for the farmers and will not attend the house,” Mr Patil said.

NCP leader Jayant Patil said that the government was not ready to revoke the suspension and hence his party will not participate in the house proceedings.