Mr Gadkari was earlier being projected by a section of the Sangh Parivar as the next PM replacing the incumbent Narendra Modi. 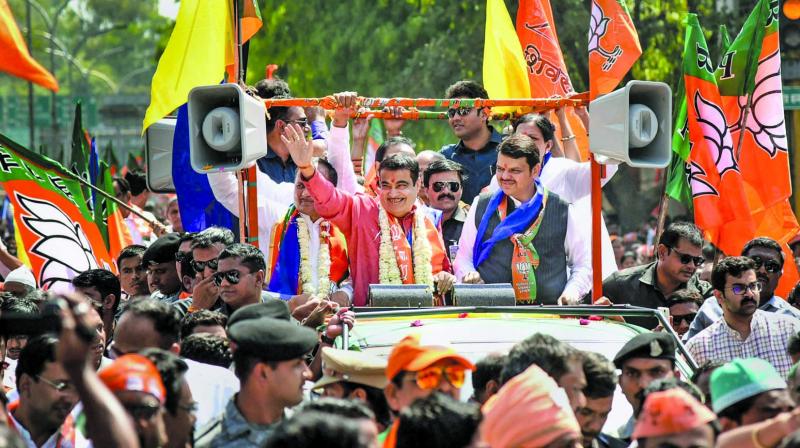 Nagpur: While expressing confidence that he would retain the Nagpur Lok Sabha seat by a bigger margin this time, BJP stalwart and Union minister for transport, shipping and Ganga rejuvenation, Nitin Gadkari, said that this time, the NDA would cross the 300 mark in the Lok Sabha polls next month while the BJP-Shiv Sena combine would bag 38 to 40 out of the 48 seats in Maharashtra.

A confident Mr Gadkari said that this time, his margin of victory would increase from 1.5 lakh to three lakh. Mr Gadkari was earlier being projected by a section of the Sangh Parivar as the next PM replacing the incumbent Narendra Modi. The senior minister in the Modi cabinet is confident that BJP will get around 270 seats in the coming elections on its own.

In the 2014 polls, Mr Gadkari defeated by a margin of 286,828 votes, Vilas Muttemwar of the Congress who won four terms from Nagpur in his political career. Mr Gadkari represents Nagpur, which is the birthplace of the Rashtriya Swayamsewak Sangh (RSS) and the land where Dalit icon Dr Babasaheb Ambedkar embraced Buddhism way back in 1956.

In an interview with The Asian Age, Mr Gadkari said that the BJP-SS government had left no stone unturned in developing the second capital into a world-class smart city. The Nagpur region had been developed as a tiger capital and tourists were being attracted to boost tourism revenue. Mr Gadkari also pointed towards the setting up of the All India Institute of Medical Sciences, Indian Institute of Management, Law University and Indian Institute of Information Technology. Mr Gadkari said that the Multi Modal International Passenger and Cargo Hub, popularly known as MIHAN had provided jobs to 25,000 youths with big companies like Tech Mahindra and Infosys and other IT companies, too, were providing jobs to educated youths.