The cause of the 'level four' fire (serious emergency call in fire brigade parlance) has not been ascertained yet, BMC sources said 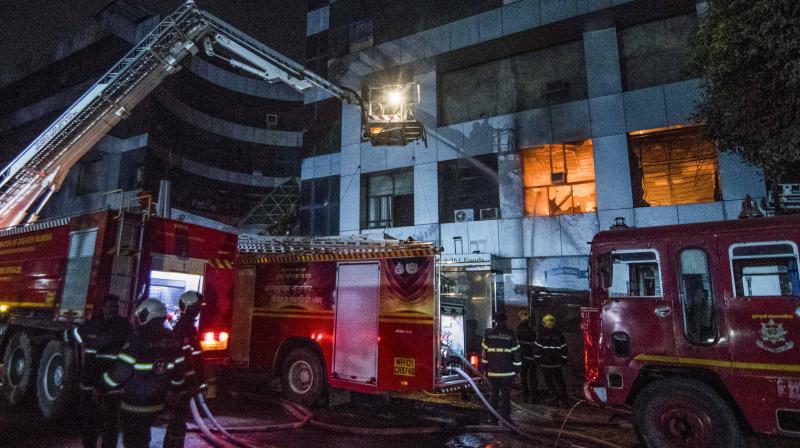 Mumbai: Ten patients died after a fire broke out at a Mumbai mall hospital where coronavirus patients were being treated, a fire brigade official said on Friday.

The fire broke out at the Sunrise Hospital in the Dreams Mall building in Bhandup area shortly after midnight, the official said. Around 70 patients were rescued, he added.

The hospital said there were two deaths due to COVID- 19 at the facility and there was no death due to the fire.

The hospital is situated on the top floor of the four-storeyed mall building and 76 patients, most of them being treated for COVID-19, were there when the fire broke out, the official said.

The incident comes amid an upsurge in coronavirus cases in Mumbai. On Thursday, the city logged 5,504 new infections, the highest daily count since the pandemic began.

The cause of the 'level four' fire (serious emergency call in fire brigade parlance) has not been ascertained yet, the BMC control room sources said.

Twenty fire engines, 15 water tankers and ambulances were rushed to the spot. Fire fighting operation is underway, the official said.

The 70 patients were evacuated by the fire brigade and shifted to another hospital, the official said, adding fire personnel are checking if any patient is still stuck there.

Mumbai Mayor Kishori Pednekar who visited the site expressed surprise that a hospital was operating inside the mall.

"I have seen a hospital at a mall for the first time," the mayor said, adding action will be taken if irregularities were found in allowing the facility to operate there.

The hospital in a statement said, "There was a fire on the first floor of Dreams Mall, Bhandup and the smoke reached up to the Sunrise Hospital located on the top floor. When fire alarms beeped, all patients were safely evacuated to the fire refuge area as the smoke was reaching the hospital."

The statement said the hospital was started last year in "exceptional circumstances" of the pandemic and has helped save many lives. "The hospital is functioning with all due compliances like fire licence, nursing home licence among others," it said.

A civic official said the BMC had issued notice to the mall in November last year for allegedly flouting fire safety norms. Former NCP MP Sanjay Dina Patil said he had also written to the BMC commissioner last year drawing the civic body's attention to the flouting of fire safety norms there.