Kaul has even booked for endangering lives of commuters as per provisions of the Railway Act and has been remanded to custody till Thursday. 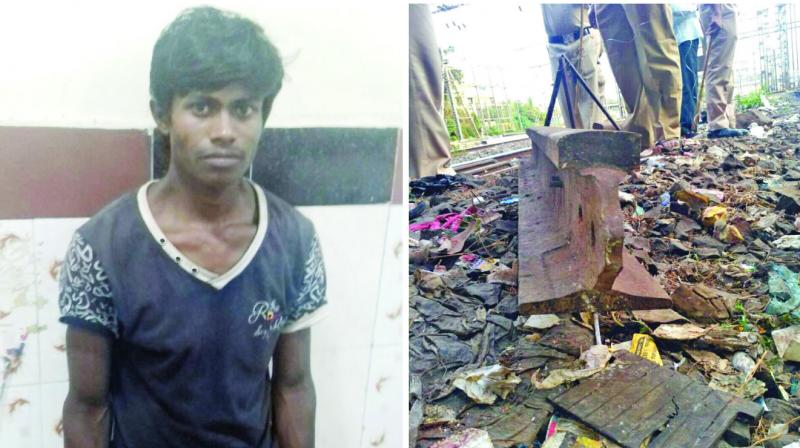 Deva Kaul placed the rod on the railways tracks between Masjid and CST stations.

Mumbai: A day after the arrest of a drug addict who allegedly placed a metal rod on the railway tracks between Masjid and Chhatrapati Shivaji Terminus (CST) station, a team of Intelligence Bureau (IB) interrogated accused Deva Kaul alias Amar. Kaul claimed during the interrogation that he wanted to attract the attention of the cops as they had not taken cognizance of his phone theft complaint recently. He was allegedly shooed away for being in an inebriated state when he had approached the city police.

Kaul sells balloons and has been staying in Mumbai since last six months. He hails from Madhya Pradesh. Kaul is in custody of the Government Railway Police (GRP) which is questioning him in connection with the incident that took place on Saturday evening. The officials learnt that Kaul had also uprooted some saplings in Kala Ghoda area, where he stays on a footpath, and flung them on the CCTV camera in the area to grab police’s attention.

“The IB officials questioned him for hours and he continued to change his versions. He wanted the police to pick him up so that he could tell them about his ordeal. After flinging of saplings did not work, he got frustrated further and then decided to keep the rail piece on tracks,” said a police officer, requesting anonymity.

On Saturday, around 4.30pm, Kaul was caught from under the Carnac Bundar bridge minutes after he was seen keeping a 5-feet long rail piece on the CST bound fast line. Kaul was so frustrated that he even pelted a stone on a signal post after keeping the rail piece and damaged it. He was caught with the help of railway point men and railway police before he could flee from the spot.

“Kaul was spotted by a motorman on adjacent track in the act. Motorman Uttam Chougule informed a pointman at Masjid station. The officials rushed to the spot and caught him soon after,” said a GRP officer. Pointman Surendra Sharma rushed to the spot with railway police and nabbed Kaul.

Kaul has even booked for endangering lives of commuters as per provisions of the Railway Act and has been remanded to custody till Thursday.