Opening of NDZ may not bring affordable houses

The government has targeted building 12 lakh houses in the ‘housing for all’ scheme in the Mumbai Metropolitan Region (MMR) and 5 lakh in Mumbai city. 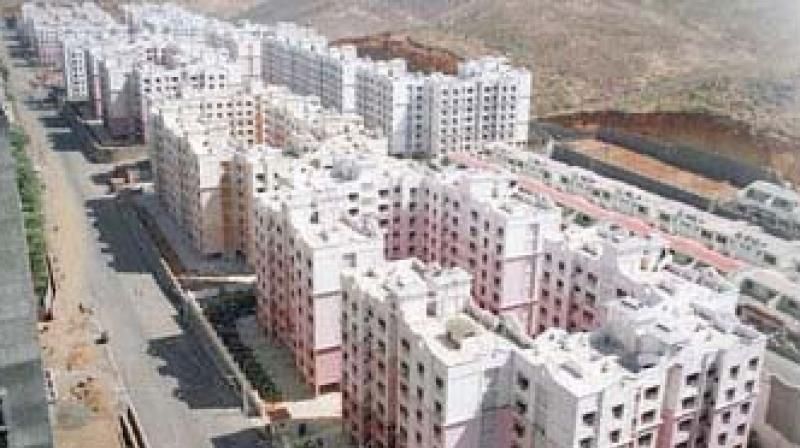 The inadequate infrastructure in this world’s second most densely populated city – where 52 per cent of the population lives in slums – will be under increased pressure from the boost to commercial and industrial activities. (Representational image)

The proposal to open up 3,355 hectares of ‘no-development zone’ (NDZ) area for affordable housing will not help the urban middle class, who may be forced out of the city, because the DP is proposing to increase only commercial FSI helping industries and businesses.

While the DP targets creating 80-lakh jobs with the expected boost for industry, there will be insufficient affordable housing to accommodate the increase in the workforce.

The government has targeted building 12 lakh houses in the ‘housing for all’ scheme in the Mumbai Metropolitan Region (MMR) and 5 lakh in Mumbai city. These numbers would be inadequate to meet the expected rise in demand. The inadequate infrastructure in this world’s second most densely populated city – where 52 per cent of the population lives in slums – will be under increased pressure from the boost to commercial and industrial activities.

Of the 3,355-hectare land opened up for affordable housing, 330 hectares are salt pan land, said Urban Development Secretary Nitin Karir. Though these places do not have adequate infrastructure the ‘common man’ will have to shift to such areas as the government intends to build affordable houses there. “We will develop infrastructure simultaneously,” said Mr Aloy Mehta, BMC commissioner. 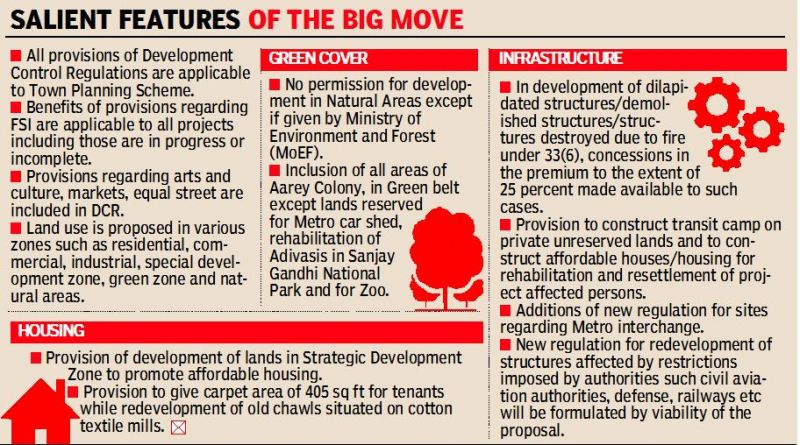 The government has not increased the base FSI, but because transferable development rights (TDR) and premium FSI are allowed, the builders can use up to 3 FSI in the city. Counting all these costs, housing is set to get costlier in the city. There was a demand from builders to reduce the premium and other charges for low budget homes, which was not considered as the government and the BMC do not want the revenues to take a hit.

But the government has provided one relief to the redevelopment of private buildings by introducing a provision for granting 15 per cent free of cost premium FSI. So residents living for many years can get one more extra room free of cost without extra payment. Provisions have been made for making available homes of 400 sq feet to the mill land workers, Karir said.

Mumbai allotted FSI 5 for commercial activities
Commercial activities in Mumbai are set to get a huge boost as the Brihanmumbai Municipal Corporation (BMC) has allotted a floor space index (FSI) of five for commercial use across the city in its Development Plan (DP) 2034. The residential sector has also been provided FSI of three and 2.5 in the island city and the suburbs, respectively.

On Wednesday, a day after CM Fadnavis approved of Mumbai's DP, which will be the blueprint for city’s use of land over the next two decades, state and BMC officials unveiled the much-awaited document for the city. According to state officials, a notification on DP will be issued in the next ten days. The new DP will be implemented a month after the notification is published.

According to officials, Mumbai is the financial capital of the city and the government wants to boost its image for commercial activities. Increasing the commercial FSI up to five is one of the steps being taken in that direction. The FSI is the ratio of the total built-up area to the total area of a plot. It is basically a tool that defines the extent of construction permissible on a plot.

The urban development department principal secretary, Nitin Kareer said, “The maximum FSI for commercial properties in the island city has been decided at 5. However, it is not necessarily applicable to every property. The maximum FSI will commensurate with the width of a road near the property concerned. The FSI will be maximum for the widest road and will be lesser depending upon the width of a road concerned.”