Innocuous jellyfish-like beings drop by every year at onset of monsoon. 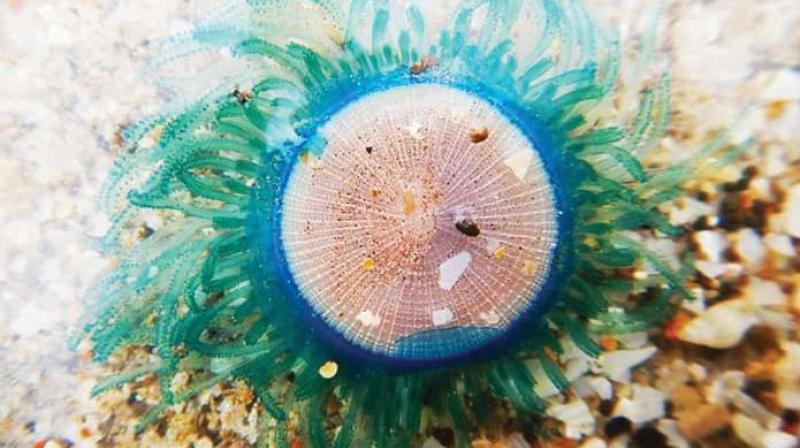 Their sting is neither poisonous nor harmful.

Mumbai: If you happen to catch sight of round, blue organisms resembling jellyfish on the Girgaum Beach, don’t be alarmed.

The innocuous ‘porpita porpita’ — more commonly known as the blue button, a marine organism consisting of a colony of hydroids (members of the invertebrate order Hydroida) that is found in tropical and subtropical waters of the Indian Ocean — landed on the Girgaum Chowpatty on Wednesday night.

While these organisms resemble jellyfish, which have a painful sting, marine experts have stated that the sting of blue buttons is not poisonous or harmful, and may cause only temporary irritation or rashes.

Marine activist and photographer Pradip Patade said he saw at least a thousand blue buttons washed ashore at the Girgaum Beach on Thursday morning. “I was informed by locals about several round blue organisms at the beach on Thursday night. They were little wary about them, however when I visited the beach the next morning, it was wonderful sight.

Many a times, these blue buttons are mistaken with venomous blue bottles, also known as Portuguese Man o’ War, but these are completely harmless,” said Mr Patade.

The visitation of porpita porpita to Mumbai beaches is not unusual, but an annual phenomenon that takes place at the onset of the monsoon. “Every year the blue buttons are seen stranded in the city’s beaches before or during the monsoon. They wash ashore at the beaches by high tides due to strong wind action,” added Mr Patade.

Blue buttons feed on small fish and zooplanktons in the sea. They sting humans only when they come in contact with them. Though the creatures’ sting is mild, it is not advisable to touch them with one’s bare hands.