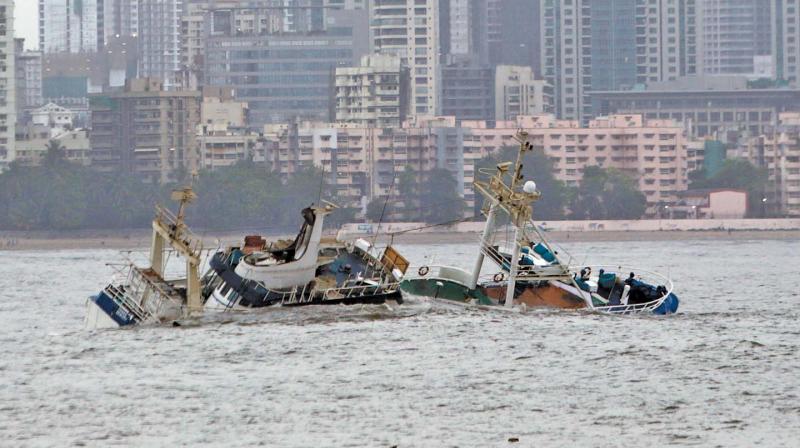 Mumbai: Ark Deck Bar, a floating restaurant-cum-bar, sank at sea near the Bandra-Worli Sealink at 1.30 pm on Friday, after its anchor scraped against rocks, which caused it to tilt. The situation was compounded by windy weather, which caused the boat to move backwards and collide into rocks, tearing open a hole. Up to 15 members of the crew were rescued, as they had used a lifeboat to come ashore. The boat was not in operation at the time of the incident. It was being moved from Bandra jetty to the Ferry Wharf, also known as Bhaucha Dhakka, at Mazgaon as part of safety protocol before the monsoon.

Deputy commissioner of police (Zone 9), Paramjit Singh Dahiya told The Asian Age, “The boat was supposed to move from Bandra jetty on Friday afternoon, like other similar boats, due to monsoon restrictions. But when it was moving, the boat’s anchor scraped with a rock and it started moving backwards due to the high tide and heavy winds initially.” He said, “After this, the crew saw water gushing in through a hole in the hull.”

Mr Dahiya said, “There were about 10-15 workers on board, and when they realised that the boat was sinking, they started hopping on lifeboats and were rescued in time. The operation went on for more than a couple of hours, but everyone was brought safely on the coast.” No medical attention was needed, as the operation went smooth, he added.

An official of the Maharashtra Maritime Board (MMB) said that the floatel had acquired permission from the maritime board. “The MMB had conducted a survey and given the permission to operate to the boat, following which it was functioning,” said captain Harish Khatri, nautical advisor, MMB.

The Ark Deck Bar was the city’s first boat lounge, deck and bar, and was among the three boats parked in the Arabian Sea that function as resto-bars, the others being ‘AB Celestial’ and ‘Mumbai Maiden’. Ark Deck Bar was opened to the public in January 2018 as a result of the joint efforts of Kookie Singh, Samyukta Singh and Viraj Chandwadkar. The boat used to sail 1.6km off the coast from the Bandra Sealink Jetty. The boat has the carrying capacity of 100 people.

According to a senior officer of the MMB, the vessel did not capsize but tilted. The floatel had the licence till Friday. The incident probably took place due to the high tide and heavy winds. A statement from the Ark Deck Bar management stated that there was a storm at sea and due to this the anchor detached and shifted on one side. Due to shifting of the weight of the boat began to tilt.

The captain had gauged the severity beforehand and cleared the boat.