Agitators also disrupted railway services on the Central and Western lines for a while before the police stepped in. 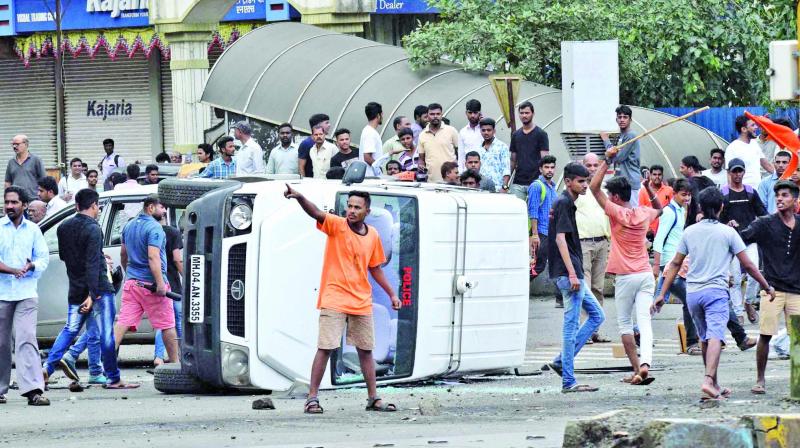 Mumbai: Protesters damaged twenty-five Brihanmumbai Electric Supply and Transport (BEST) buses across the city and torched another at Mankhurd while roaming the streets on Wednesday to enforce the bandh that was called over the Maratha reservation issue. There were, however, no casualties.

Agitators also disrupted railway services on the Central and Western lines for a while before the police stepped in. Dozens of protesters blocked the railway tracks at Jogeshwari station on Western Railway (WR) from 9.18 am to 9.26 am, but services resumed after the lines were cleared. On the Central Railway (CR), a group of protesters halted trains at Thane railway station during peak hours, from 9.59 am to 10.20 am, while a rail roko was also seen around the same time at Ghansoli on the Trans-Harbour line. Due to this, commuters had to endure a 30-minute delay in services. Ghansoli saw another rail roko from 12.30 pm to 4.28 pm wherein 56 services were cancelled.

CR PRO A.K. Jain said, “Other than 56 services on the Trans-Harbour line, no services were cancelled.”

As the agitation was severe in Navi Mumbai, railway authorities have beefed up security at stations across the city.

Auto-rickshaw drivers, apprehensive about violence and vandalism, preferred not to ply on the roads, according to Shashank Rao, leader of the Mumbai Autorick-shawmen’s Union.

Bus services were stopped after two buses were pelted with stones and buses en route to Mulund and Vashi did not ply beyond Airoli. Agitators threw petrol bottles on a bus on the Santacruz-Nerul route, charring nine seats. Stones were pelted at buses in Ghansoli and Kopar Khairane and the tyres of six BEST buses tyres were deflated in Kurla, Chandivali, Andheri and Kandivali in the morning. According to BEST spokesperson Hanmant Gophane, 3,211 buses of 3,228 were allowed to ply on Wednesday.

Protesters also staged a ‘rasta-roko’ at Panvel, blocking the old Mumbai-Pune Road and the Mumbai-Goa Road for hours in the process.