Heavy rains likely over this weekend

Meanwhile, heavy rains in the past two days have led to a seven per cent rise in the total rainfall this monsoon. 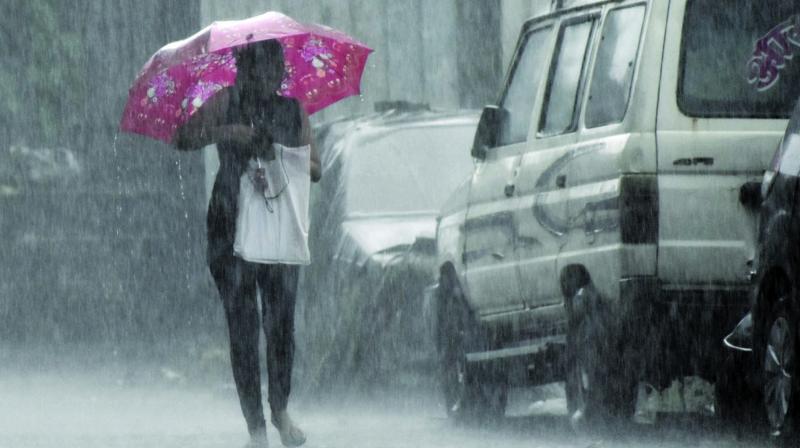 Woman shields herself against the heavy downpour in Wadala on Thursday. (Photo: DEBASISH DEY)

Mumbai: In what may come across as a relief for the city’s reservoirs, weathermen have predicted a surge in monsoon across the city, starting Friday  until Sunday

“We would see intense clouding for most parts of the day, with rains following soon,” said an official.

According to private forecaster Skymet Weather, likely low pressure area over North Bay of Bengal would be moving inland in west-northwest direction by July 26 and revive the off-shore trough again. As a result, intense heavy rains would make a comeback.

Meanwhile, heavy rains in the past two days have led to a seven per cent rise in the total rainfall this monsoon. On Tuesday morning, the rainfall percentage was 56 per cent of the average rainfall Mumbai receives every year, which further rose to 63 per cent on Thursday morning.

After extreme heavy rainfall in the first week of July, the city had witnessed a dry spell for the last two weeks due to poor monsoon winds over the North Konkan region. However, on Tuesday night, Wednesday and Thursday, the city experienced heavy downpour.

Moreover, on Thursday afternoon, the city witnessed light to moderate showers with eastern suburbs, western suburbs and city area receiving 20.43mm, 12.41mm, and 8.39mm of rainfall respectively. Despite the heavy rainfall in the past two days, the amount received this monsoon is comparatively less than last year.