Kolis to hold massive silent protests against government over memorial

According to community members, the protest will be as huge as the ‘maratha andolan’. 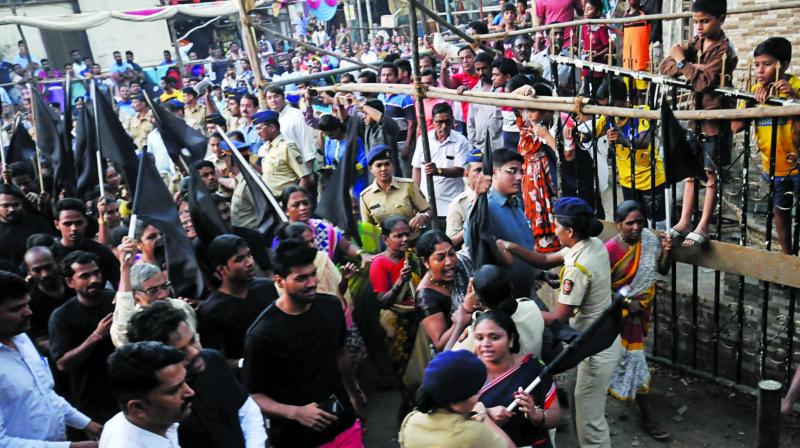 File photo of the Koli protest at Cuffe Parade on Friday.

Mumbai: After the successful bhoomi pujan of Shiv Smarak on Sunday, the Koli community has planned to organise a silent protest against the Bharatiya Janata Party (BJP) government. According to community members, the protest will be as huge as the ‘maratha andolan’. The protest will be led by the youth of the community who will be reaching Mumbai for a meeting, scheduled Sunday night.

Mahesh Tandel, the president of Maharashtra Machhimar Sanghatana (MMS), stated that the protest would not get over easily, as assumed by the government. Mr Tandel said, “We had put forth our demands to the chief minister, after he had called us to discuss the matter. If the  demands aren’t met, then the coming week will see us protesting in large numbers.”

Damodar Tandel, president of Akhil Maharashtra Machhimar Kruti Samiti, was one of the nearly 200 fishermen from Cuffe Parade who were detained by the police. Mr Tandel alleged that they were all put into three police vans and taken to Versova, Ghatkopar and Chembur police stations. They were stuffed in a small room with other criminals and received ill treatment. According to the fishermen, they held a meeting on Sunday evening to discuss further steps.

Mr Tandel told The Asian Age, “All our further protests will be carried out by the youth of our community. This youth is coming to the city from all over the state, and they will plan the protest in a massive manner. Although their protests will be silent, we will come out with fixed plans.” The community is against the project, as its livelihood is likely to be disturbed due to destruction of marine life. The matter is currently with the National Green Tribunal (NGT) in which the respondents have been asked to reply by January 31, 2017.