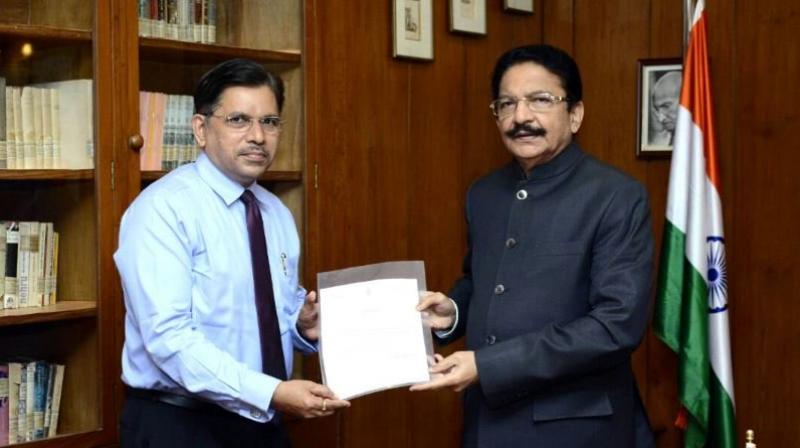 Maharashtra Governor Ch Vidyasagar Rao, who is the Chancellor of all public universities in the state, handed over the letter of appointment to Dr Pednekar at Raj Bhavan on Friday. (Photo: Twitter)

Mumbai: Principal of the city-based Ramnarain Ruia Autonomous College, Suhas Raghunath Pednekar, was appointed as the new Vice Chancellor of the University of Mumbai on Friday.

Maharashtra Governor Ch Vidyasagar Rao, who is Chancellor of all public universities in the state, made the appointment. The governor handed over the letter of appointment to Dr Pednekar at Raj Bhavan.

Pednekar, a professor of chemistry, has been appointed as the VC for a period of five years or till he attains the age of 65 years, whichever is earlier, a Raj Bhavan statement issued here said.

He succeeds Sanjay Deshmukh, who was removed from the post of VC of the university on October 24, 2017. Devanand Shinde, vice chancellor of Shivaji University in Kolhapur, was holding the additional charge of the post of vice chancellor since then. The governor had constituted a search committee under the chairmanship of Dr K Kasturirangan, former chairman of the Indian Space Research Organisation (ISRO) to recommend to him a panel of names suitable for the post.

Shyam Lal Soni, director of National Institute of Technology, Pauri (Garhwal) Uttarakhand and Bhushan Gagrani, vice chairman and managing director of CIDCO were other members of the committee.

The governor had removed Sanjay Deshmukh from the post of VC for his "gross negligence" which led to inordinate delay in the declaration of university's exam results.

Deshmukh had been sent on forced leave by the governor in August 2017 after the former faced flak over the delay in results from students, opposition parties and the government.

He was blamed for hastily implementing the new on-screen marking system that led to an unprecedented delay in declaration of results.