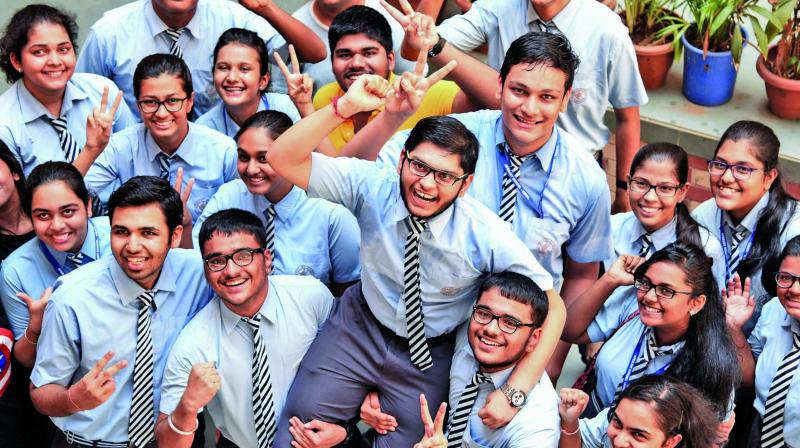 Mumbai: The Central Board of Secondary Education (CBSE) announced the results of Class 12 Saturday afternoon. While there is no one in the top 10 from the Mumbai region, there is a good number of students who have scored 90 per cent and above. According to the CBSE, this year too, girls have fared better than boys by 9.32 percentage points. Over 11.8 lakh candidates across the country appeared for the examinations in the academic year 2017-18.

While Noida’s Meghna Srivastava has topped in the country, with an aggregate score of 99.8 per cent; Anoushka Chandra of Ghaziabad has come a close second. Speaking of Mumbai toppers, Saachi Jain from R.N. Podar School, Santacruz, has got a whopping 97.08 per cent in the science stream; followed by Ashmita Jain from St. Joseph’s High School, Panvel, with 97.02 per cent. Podar’s Harneet Singh (commerce stream) has topped the city with a massive 98 per cent, while Abhijet Didwani (commerce stream) of Gopi Birla Memorial School has scored 92.40 per cent.

Science students want to pursue medicine or research. For example, Ashmita Jain, who is a Panvel-resident, is currently giving her entrance exam to get into medical courses. “I had always wanted to become a doctor and I decided to take it seriously academically after I completed Class 10. As soon as I clear my AIIMS entrance exam, I will start working more dedicatedly towards my future,” she said. Two years ago, Ashmita Jain had topped the city with respect to Class 10 CBSE results.

Meanwhile, Saachi Jain (17), who is currently doing her integrated course in engineering, wants to get into computer engineering in the near future. “I always loved Maths and found Physics to be one of the toughest subjects. Surprisingly however, I scored the highest in Physics, which I still cannot believe. I am so happy that I scored so well,” she said.

Harneet Singh of Podar School said, “I never considered the final board exams as anything different from the regular exams.” He said.