According to officials, it is a very painstaking process and they often run out of time due to short staffing and the quality too suffers. 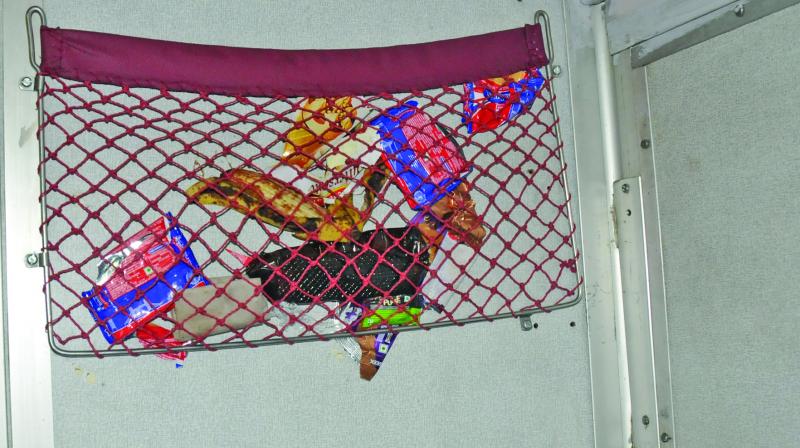 Trash is often found in the mesh. (Photo: Debashish Dey)

Mumbai: Cleaning up after Mumbai steps off a long distance train is a gargantuan task. It takes an average cleaner around six hours to do his share of the job in a 24-coach train.

Ganesh Gaikwad (name changed), is one of those who has to deal with this daily on a daily basis. Explaining his routine, Ganesh says, “Our duty hours are mapped according to the schedule of the trains. For instance, if the Udyan is leaving at 8 am, I have to work through the night with my colleagues to ensure the train is clean enough for the passengers to travel in it.”

Understaffing is one of the biggest problems they face. “Some of us are Railway employees, while others are contractual labour. They have the option of quitting whenever they feel it’s getting too taxing. But not us,” he says.

According to officials, it is a very painstaking process and they often run out of time due to short staffing and the quality too suffers.

An official said, “One man ends up cleaning close to 1.5 coach approximately for six hours and a maximum of this time goes in scrubbing the grime off the trains, especially paan stains,” he said.

The cleaning process of a train starts with the clearing of dry waste first, after which the wet waste is collected separately. All coaches are then fumigated with insect repellent.

Despite it being such a time consuming job, cleaning is considered secondary in the standing operating procedure. The primary activity is safety checks before the train departs.

According to officials, even though the facility of ‘Clean My Coach’ has been activated on almost 35 trains on both central and western railway, the amount of garbage generated is almost the same once the trains arrive.

The maintenance staff at Central Railway’s Wadi Bunder said, “Trains like the Punjab Mail among others, who do have the facility of ‘Clean My Coach’, generate the same amount of garbage as they did before the facility was introduced.” It is a facility introduced in long distance trains, by which the Railways will respond within 10 minutes of receiving a complaint from the passenger via SMS.