Says copter was moving before he reached helipad, SOPs not followed in Alibaug. 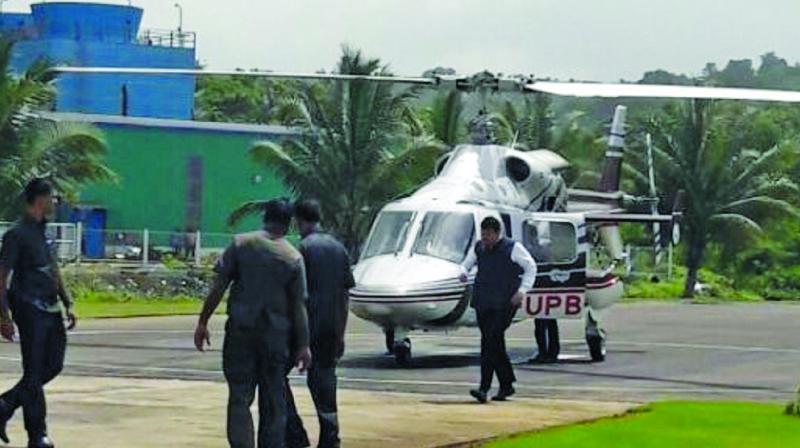 The state will prepare Helipad Location Policy to avoid such incidents in the future.

Mumbai: After surviving helicopter mishap in Alibaug on July 8, chief minister Devendra Fadnavis called it ‘shocking’ and ‘unbelievable’ in the state Council on Wednesday. “It is a standard operating procedure that chopper starts after a person sits inside it. But the copter was moving even before I reached the helipad,” said Mr Fadnavis while replying to questions raised by members of the state Council.

CM Fadnavis’ copter was hit by a snag in Latur in May, and he also survived a chopper mishap again in June in Raigad. Congress MLC Sharad Ranpise raised this issue in the house on Wednesday and expressed deep concerns over CM’s security. Opposition leader Dhananjay Munde also said that both incidents must be probed thoroughly.

Narrating the Alibaug incident, CM said, “Generally we get down from copter only when blades stop completely. But that day I came out even before the blades stopped. We didn’t notice it there. But when we returned to helipad after finishing the programme, the chopper was already moving. This doesn’t happen in standard operating procedure (SOP),” said CM Fadnavis.

He said, “Education minister Vinod Tawde was with me during the mishap. He went near the right door of the copter, and I was going to board the copter from the left side. But, even before I could reach the chopper, it started going straight. When I saw that it was moving, I ran away from it, saving myself from its blades. Mr Tawde also ran to the other side. At the same time, the pilot saw the people while the chopper was moving. But instead of controlling it, he took off and then landed.” After CM Fadnavis narrated the entire story, MLCs demanded an inquiry into the matter. CM Fadnavis said, “DGCA’s internal inquiry body AAIB has asked reputed investigation companies ATSB USA and Turbo Mega France to probe the matter. We will get the report once the investigation is completed,” he said.

The licence of pilots Captain Sanjay Karve and co-pilot Captain Mohit Sharma have been cancelled by DGCA after the Latur mishap. He also told the council that all old permanent helipads would be audited in the state. “IG level officer looks after VIP security. But now the government will ask him to prepare a book of SOP for the VIP security in the state, and it will be followed strictly,” said Mr Fadnavis.