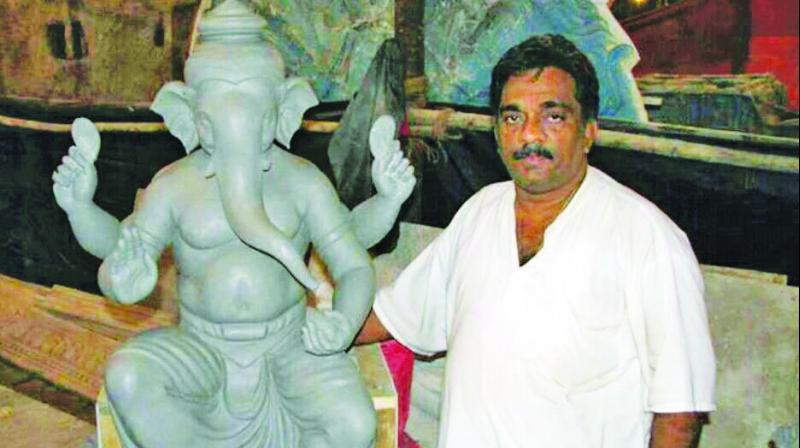 Mumbai: Various Ganesh mandals in the city and artists have mourned the loss of well-known Ganesh idol maker Vijay Khatu (64), who passed away on Wednesday after suffering a heart attack at his residence. Khatu who was honoured with the title of ‘Best Sculptor’ by the state government was famous for making hundreds of Ganesh idols towering 25 feet and above.

City-based artist and author Manoj Acharya said that Khatu actually introduced the trend of big idols. “His Ganesh idols had the trademark style of his artwork — broad forehead with magnificent eyes which spoke a thousand words. Khatu’s loss has left a void in the world of sculpting,” he said. Sudhir Salvi, secretary of Lalbagcha Raja Saravajanik mandal said, “Khatu had built Lalbagcha Raja idol in the year of 1997 and 1998.”

Sources close to the Khatu household, said that the 64-year-old suffered a cardiac arrest at his residence in Shivaji Park on Wednesday morning. After he complained of pain in the chest he was rushed to a nearby hospital but succumbed before reaching the hospital. His brother Rajan Khatu said that the final rights were conducted on Wednesday evening at the Dadar crematorium.

Khatu has been credited for making idols for some of the famous mandals including the Ganesh Galli idol and Chinchpokli mandal. In 40 years of sculpting Ganesh idols, Khatu has made more than 250 idols measuring more than 25 feet high. He provided idols to more than 800 mandals in the city.

Recalling Khatu’s work, film editor Milind Damle said, “We grew up looking his art. Big idols of Ganesha was his trademark. The strokes he used to draw especially on eyes of lord Ganesha was marvellous. We have lost a great artist and good human who had contributed a lot for the well-known Ganpati festivals.”