Cut my hands, but pull me out of debris: Mumbai building collapse survivor

Jadeja is one of the 11 survivors pulled out from under the rubble of the four-storey building which collapsed on Tuesday morning. 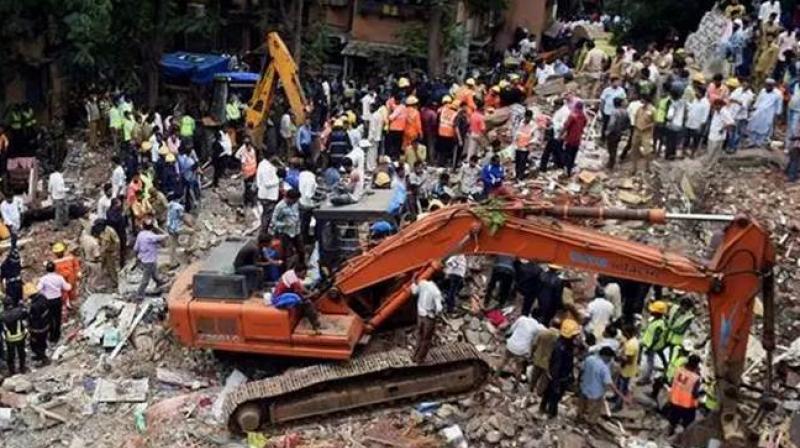 Mumbai: "Please cut my hands but pull me out of the debris," implored Pragya Jadeja in a frail voice when she spotted an NDRF jawan looking out for survivors after the collapse of a residential building in suburban Ghatkopar.

"Mere dono haath kaat do bhaiya, mujhe jaldi bahar nikaalo...nahi to main mar jaungi (cut my both the hands but please pull me out quickly otherwise I am going to die)," the 50-year-old said in a voice filled with pain and helplessness.

Jadeja is one of the 11 survivors pulled out from under the rubble of the four-storey Siddhi Sai Cooperative Housing Society which collapsed on Tuesday morning, claiming 17 lives.

"We could hardly peep in to find that Jaedja's both the hands were partially crushed between two big fallen walls. But we comforted her, cut the huge RCC structure, and finally pulled her out safe," said constable Santosh Jadhav.

Similarly, a 20-year-old woman was pulled out alive from under the mound by the rescuers who reached her after hearing her cries for help.

"The woman was trapped under the huge pile of the rubble and was wailing in pain. We removed big pillars while praying that they don't fall on her and then pulled her out," said another personnel.

A 47-member team of National Disaster Response Force (NDRF) was pressed into the search and rescue operation immediately after the incident.

The case of Rajesh Doshi, a resident of the ill-fated building, underlines how survival instinct comes into play in such tragedies.

Doshi, whose legs got crushed under the debris, called up his son on his mobile phone around 6 pm, hours after the collapse, trying to explain his position.

"Doshi called his son at 6 in the evening, but it took nearly eight hours to locate and rescue him safely. He was finally pulled out of the rubble around 2.45 am," said a BMC official engaged in rescue operation.

"Our team used sensors that could catch the heartbeat of people trapped under debris. We also used trained sniffer dogs. We lowered cameras from the passages/holes to locate who is trapped under the rubble and acted accordingly. We used cutters sparingly," he said, adding the absence of rain came as a boon for the jawans.