The BEST also suffered a loss of approximately Rs 1.5 lakh due to violent agitations. 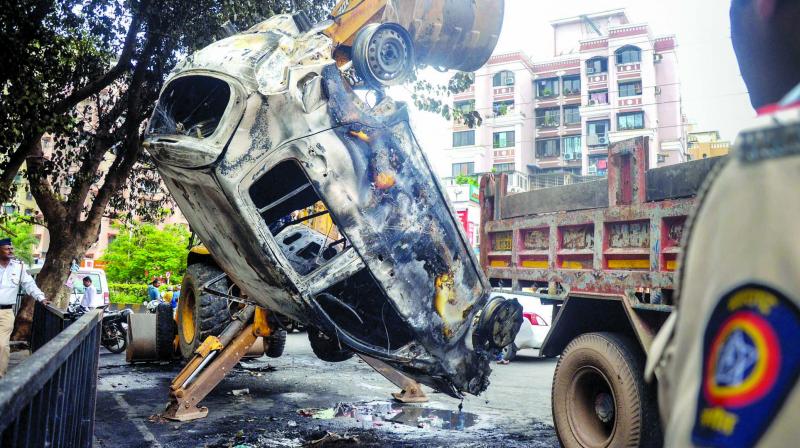 171 MSRTC buses were vandalised in the past five days due to the protests.

MUMBAI: The Brihanmumbai Electric Supply and Transport (BEST) sufffered a loss of approximate Rs 1.5 lakh on Thursday in course of the Mumbai bandh called by the Maratha Kranti Morcha.

The BEST plans to file a case to claim the damages. According to a BEST official, not a single penny has been recovered from the loss caused owing to several protests.

Sources in MSRTC said that the corporation is in process of filing an FIR for every damaged bus in respective police stations across the state. However the exercise seems to be futile as the corporation has not received a single penny for any damages in past.

“25 BEST buses across the city were damaged including one was torched at Mankhurd, due to which Rs 1,45,480 was lost,” said an official of BEST. Of these, 14 buses damaged due to stone pelting, nine bus tyres were deflated and two buses were affected due to fire.

He added, “Although we are filing the cases of recovering of money but we have never received single penny from the loss due to damages.”

Meanwhile the Central Railway, which suspended 56 services on Trans-Harbour line, claimed that they did not face much loss, as most of the commuters are monthly pass users who were allowed to use the Harbour Line during the Maratha reservation protests.