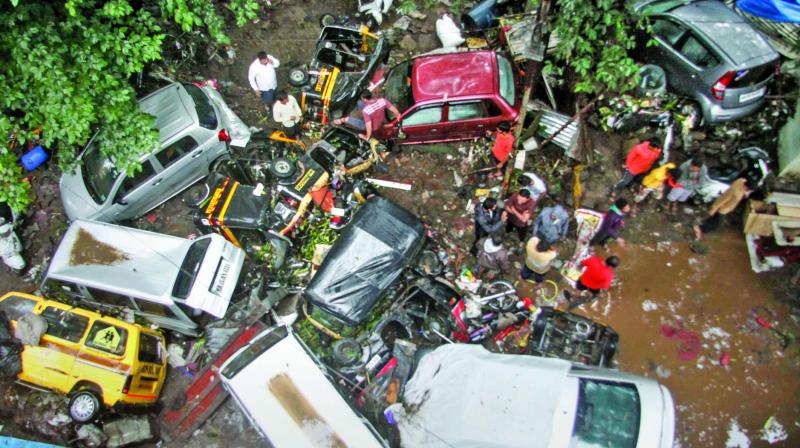 Vehicles are piled up on a street on Thursday in the wake of a flash flood brought about by torrential rainfall in Pune. (Photo: PTI)

Mumbai: At least 17 people were killed and four persons were missing in various incidents of flooding and wall collapses after intense rainfall battered Pune city and various other parts of the district. Nearly 16,000 people, including some stuck on rooftops and trees, were rescued. Schools and colleges in various tehsils of Pune declared a holiday on Thursday in view of the deluge.

Chief minister Devendra Fadnavis said he was pained to know about the loss of lives due to heavy rains in Pune. He said teams of the National Disaster Response Force (NDRF) were deployed in the city and Baramati tehsil, and all necessary assistance was being provided in the affected areas. “My deepest condolences to the families. We are providing all possible assistance needed. State disaster management officials and the control room in continuous touch with the Pune collector and Pune Municipal Corporation (PMC),” he said in a tweet.

“2 NDRF teams are deployed in Pune & 2 in Baramati. One more NDRF team is on way to Baramati. State Government is also closely monitoring the dam discharge (sic),” he added.

Five people — who were sleeping at a dargah in Khed-Shivapur village, located on the Mumbai-Bengaluru National Highway — were washed away after the heavy downpour, superintendent of police Sandip Patil said.

Also, 12 people, including five women, lost their lives in various other rain-related incidents.

Of these, five people, including a nine-year-old boy, were killed in wall collapse incidents in the flooded Aranyeshwar area, chief fire officer Prashant Ranpise said.

The Army also rescued another 300 people, including some stranded on rooftops of their houses and on trees, from Solapur road area, a defence spokesperson said.

“The rain stopped on Thursday morning, but many houses and residential societies in low-lying areas were still inundated. There were several reports of wall collapses and uprooting of trees in those places,” another official said, adding that several vehicles were also swept away in the floodwaters.

A 10-month-old child and its family members were rescued from a flood-affected area by the fire brigade following heavy rains in Pune district.

The baby and its family members were stranded in a flooded area .

The five members, including the baby, were stuck outside their house in Parvati area near Mitra Mandal chowk Wednesday after heavy rains lashed the city, said fire officer Maruti Devkule.

“We received a call that a family of five was stranded. Upon reaching there, we found that the family members were sitting on a water tank outside their house and there was a toddler among them,” he said.

Mr Devkule said that he waded through the gushing water and rescued the child first.
“After putting the baby in a basket, I placed the same on a life ring and swam along with it to safety. Later, the child's parents and grandparents were also rescued,” said Mr Devkule.

Three teams of the National Disaster Response Force (NDRF) have been deployed in the city for rescue and relief work.

The police and rescue agencies fear more rain-related casualties as reports continue to
pour in.