1st Thackeray to be Maharashtra CM

Sharad Pawar said late Shiv Sena founder Balasaheb Thackeray would have been happy if he were alive today. 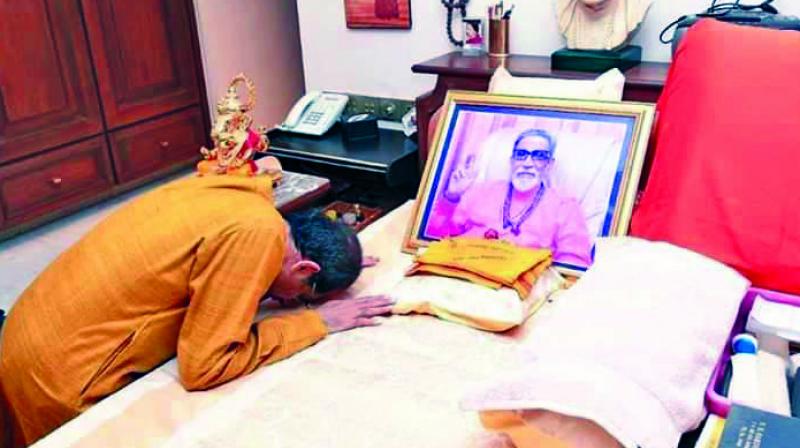 Mumbai: In a dramatic turn of events precipitated by the Supreme Court’s Tuesday morning order to hold a televised floor test in the Maharashtra Assembly “within 24 hours”, chief minister Devendra Fadnavis and his deputy Ajit Pawar resigned from their posts and Shiv Sena chief Uddhav Thackeray is all set to become the first in the Thackeray family to become Maharashtra’s chief minister.

Mr Thackeray will lead the government of Maha Vikas Aghadi — the grand alliance of the Shiv Sena, NCP and Congress. He is likely to take oath at Shivaji Park on Thursday, November 28.

Mr Thackeray’s ascent was facilitated by the resignation of Mr Fadnavis as CM on Tuesday, barely four days after he took charge as chief minister. Mr Fadnavis stepped down immediately after the unforeseen resignation of Ajit Pawar in the afternoon, leading to the collapse of a shortlived BJP-led government.

At the meeting, Mr Thackeray mocked the BJP, saying that the Opposition parties had shown more trust in him than the party with which he was allied for nearly 30 years. He also had a special word of thanks for the NCP chief and Congress president Sonia Gandhi.

Lashing out at his former saffron ally for its “hatred towards his party”, Mr Thackeray said: “Whenever there was a necessity, they sought the Sena’s support, but they did not hesitate to abandon us when there had no need for us.”

“My government will not act against anyone with vengeance, but no one should create hurdles for us,” he added.

“I want to thank Soniaji also. Parties with different ideologies have come together. Those who were friends for 30 years did not trust us. But those against whom we fought for 30 years have trusted me,” Mr Thackeray said.

Sharad Pawar said late Shiv Sena founder Balasaheb Thackeray would have been happy if he were alive today. “The Maha Vikas Aghadi government will work well under Uddhav’s leadership,” he said.

Mr Thackeray recalled Supriya Sule’s first election, when Bal Thackeray decided that Sharad Pawar’s daughter should be elected unopposed and did not nominate any candidate against her. “Today Pawar Saheb is guiding me. This is not give and take though,” he said.

Governor Bhagat Singh Koshyari has called a special Assembly session at 8 am on Wednesday where a floor test will be conducted after pro-tem Speaker Kalidas Kolambkar administers the oath of office and secrecy to all the 288 newly-elected members.

Mr Kolambkar was appointed by the governor on the orders of the Supreme Court, which ordered a floor test on Wednesday.

The Maha Vikas Aghadi comprises 154 MLAs of the Shiv Sena, Congress and NCP (including Ajit Pawar). They have also claimed the support of eight MLAs from smaller parties and Independents.

While announcing his resignation as chief minister, Mr Fadnavis said: “Ajit Pawar decided to cooperate with us and hence we formed the government. But today he told me he was quitting due to personal reasons. He said he could not continue with the alliance for some reasons and he was resigning. Since he has resigned, we too do not have a majority.”

After announcing his resignation, Ajit Pawar avoided all contact with the media and stayed at his residence for most of the day. In the evening, at around 9.20 pm, he visited Sharad Pawar’s residence in Mumbai.

At the Maha Vikas Aghadi meeting, Chhagan Bhujbal said that Ajit Pawar should be accepted back into the NCP fold.

“Several people have worked hard for the NCP. I want to mention Ajit Dada’s contribution is big in this regard. Mistakes happen... We need some key people to be around to strengthen this alliance,” Mr Bhujbal said, and added that NCP state unit president Jayant Patil and senior leader Praful Patel should take the initiative to bring him back.