Railway officials also laid wreathes at the 26/11 memorial at the Chhatrapati Shivaji Maharaj Terminus, one of the targets of the terror attack. 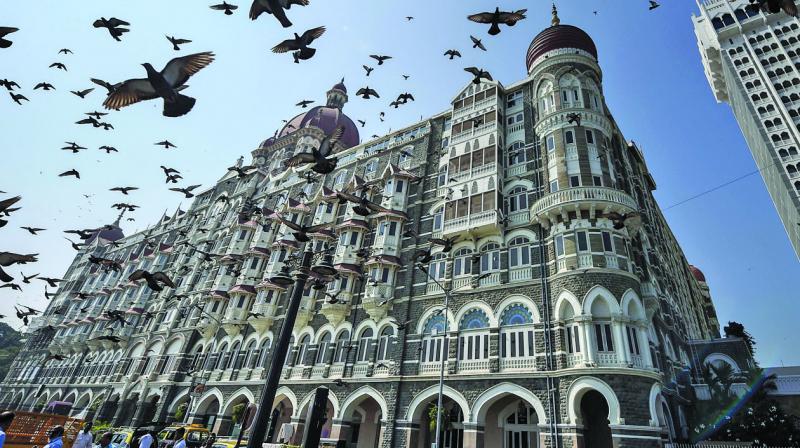 The Taj Mahal Palace, one of the sites of the 2008 terror attacks that had claimed 166 lives. (Photo: PTI)

Mumbai: Eleven years since the horrific terror attack in Mumbai on November 26, 2008, tributes poured in on Tuesday from various quarters for the martyrs on the 11th anniversary.

Among those who remembered the slain bravehearts, who fell to bullets of Pakistani terrorists while repulsing the deadly attack on this day, were their kin, politicians, government officials, sports persons and common citizens.

Mr Fadnavis said, “I pay homage to the brave policemen who fought for Mumbai’s safety and laid down their lives for us. We are proud of them and we will strive hard for the safety and security of our state.”

Railway officials also laid wreathes at the 26/11 memorial at the Chhatrapati Shivaji Maharaj Terminus, one of the targets of the terror attack.

Maharashtra police on their official Twitter handle offered tribute saying, “Sacrifices we will never forgot. We will never let go wasted.” “A day to remember our martyrs, Renewing our resolve to fight terror harder and protect the city with all our might,” said Mumbai Police on the micro bogging site.

Tributes were also paid at state-run Cama and Albles hospital near BMC, Hotel Taj Mahal Palace at Colaba and Hotel Trident at Nariman Point. Citizens also paid floral tribute and lit candles in front of statue of ASI Tukaram Ombale at Girgaum Chowpatty, where he was martyred in a successful attempt to catch terrorist Ajmal Kasab.

A host of prominent sports persons led by cricket icon Sachin Tendulkar paid tributes to the martyrs. “It’s been 11 years, but we shall not forget the sacrifices of our brave police & armed forces. They took the fall to ensure the nation and humanity stands tall. My heart goes out to the families of victims,” tweeted the batting legend and Bharat Ratna.

“Remembering the bravehearts and the innocent civilians who lost their lives during the 26/11 attacks. Gone but never forgotten,” India cricket captain Virat Kohli tweeted.

On November 26, 2008, 10 Pakistani terrorists arrived by sea route and opened fire indiscriminately at people killing 166, including 18 security personnel, and injuring several others, besides damaging property worth crores.

The attacks had begun on November 26 and lasted till November 29.

Ajmal Kasab was the only terrorist who was captured alive. He was hanged four years later on November 21, 2012.