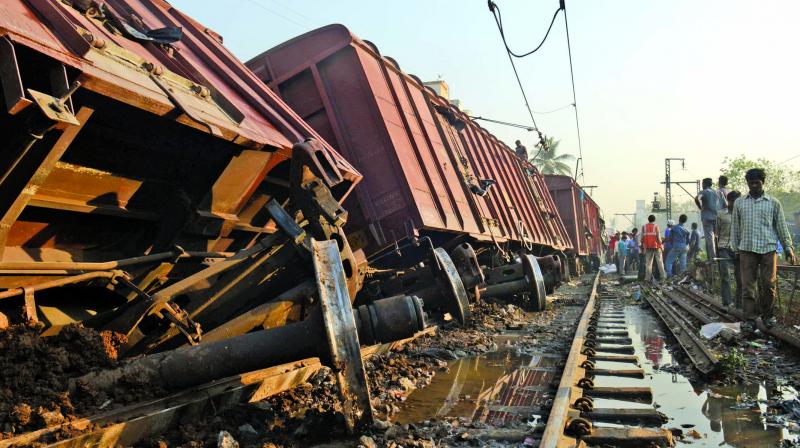 The wagons derailed around 4.09 am on Monday near Guru Tegh Bahadur station. (Photo: Rajesh Jadhav)

Mumbai: The derailment of a goods train near Guru Tegh Bahadur (GTB) station led to the suspension of approximately 80 per cent of services on Harbour — around 500 — on Monday.

Three wagons of a goods train toppled over and fell on their sides at around 4.09 am on Monday.

As a result, office-goers heading towards Chhatrapati Shivaji Terminus (CST) were affected in the morning and again in the evening peak hours as services were being operated only between Kurla and Panvel.

The goods train was carrying pulses, of which six tonnes spilled on the tracks. Services between CST and Panvel were resumed at 8.33 pm.

Following the mishap, the Central Railway (CR) was left in a panic even though an extra 64 Brihanmumbai Electric Supply & Transport (BEST) buses were pressed into service to handle the situation.

Commuters said the move was completely useless as the capacity of the buses is limited. Jayant Kamble, who was trying to make his way to his office in CST at around 8 am, said he had been at the Tilak Nagar station for one-and-a-half hours. “My friend, who catches the train to CST at around 6 am, said he got the train to CST but now it’s 9. 30 am and the trains are so full that I can’t even think of catching it,” he said. He further added, “I don’t want to risk my life and hang out and neither can I afford the taxi.”

Another commuter Amit Shah, a resident of Kharghar, said since trains were running only until Kurla, the rush and chaos at the station when he alighted was more than a normal person could handle. He said, “The foot overbridge at Kurla is quiet narrow. The tussle between passengers continued from the local train to the bridge and then again between Kurla and CST, when I had to switch to the mainline.”

The Harbour line sees 590 services all day but according to officials the train service was affected for almost 15 hours.

CR chief public relations officer Narendra Patil said, “We are investigating as to why the wagons derailed. As of now we are trying our best to restart services between CST-Kurla at the earliest.”