Owing to the sheer noise over the issue, the house had to be adjourned for 15 minutes. 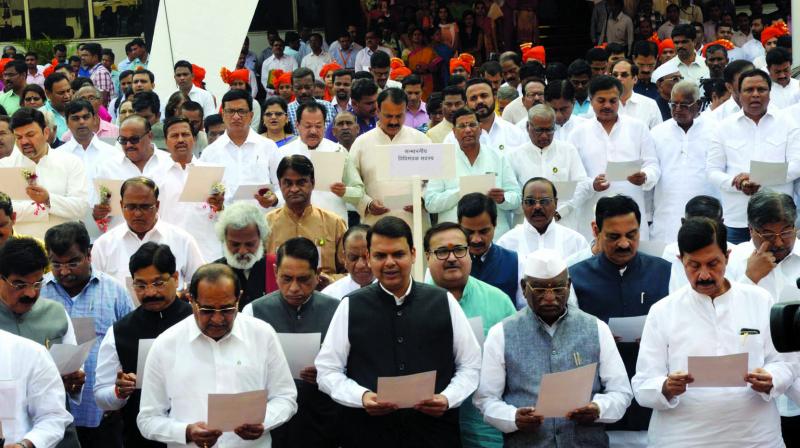 Mumbai: The state government has said that it is checking the possibility of making the Marathi language compulsory till standard 10 or 12. Presently, Marathi is compulsory only till standard 8. Referring to lapses in the government’s celebration of the Marathi Bhasha Din on Tuesday at the state legislature premises, opposition members from the Congress and NCP termed it as an insult to the language.

The Shiv Sena too expressed its displeasure over not inviting its leaders to the celebration. Even as a song was sung as part of the revelry, the loudspeaker stopped for some time.

After the assembly resumed, NCP leader Ajit Pawar targeted the government for faulty microphones and omission of the last stanza of noted poet Suresh Bhat’s poem on Marathi at the function to mark the birth anniversary of V.V. Shirwadkar, popularly known as Kusumagraj. The date is observed as Marathi Gaurav Din.

Pointing at the omission of the last para of Mr Bhat’s poem, Mr Pawar said that this happened after Monday’s faux passé where the governor’s speech was not translated into Marathi. “The translator had come but he was taken to the wrong place,” said Mr Pawar. Post all the remarks, members of the opposition entered the well before the speaker and started shouting slogans.

Mr Fadnavis asked the opposition not to politicise the issue “Who was the chief minister when this song was written, whose government was in power when the language suffered!” he questioned. However NCP group leader Jayant Patil said that the situation of Marathi is relevant even today when the Sena-BJP is in power. Leader of the opposition Radhakrishna Vikhe-Patil demanded an apology from the government.

Owing to the sheer noise over the issue, the house had to be adjourned for 15 minutes. After it resumed, education minister Vinod Tawde said, “The original poem features in Bhat’s book Roopgandha. It was Bhat’s wish that the last stanza be omitted in the Marathi gaurav geet. So even in schools, the children were taught only the first six stanzas.”

Mr Pawar demanded that the Marathi language be made mandatory till standard 10 or 12. To this, Mr Tawde said, “We are working on whether it should be compulsory till standard 10. The sentiments of the legislative assembly will be conveyed to the school curriculum board.”