Tax payers in a fix over filing I-T returns by July 31. 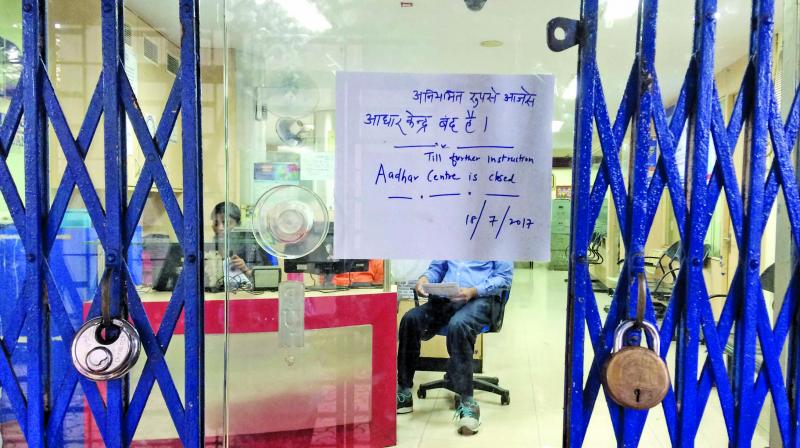 Most of the seven centres visited were found to be closed. (Photo: Shripad Naik)

Mumbai: At a time when July 31 is the last date to file income tax returns with mandatory Aadhaar card details and its link-up with PAN cards, several Aadhaar card registration centres in the city were found shut on Thursday. Sources said the centres in the city are shut since the last 10 days for updates. Needless to say, the inconvenience caused to those who are running from pillar to post to make Aadhaar cards to file their tax returns. A spot visit made by The Asian Age at seven Aadhaar card centres on Thursday at Prabhadevi, Mahim, Lower Parel and Dadar revealed that most of them were shut. Sources from the BMC said that the government took the machines for update and are fitting a GPRS machine. The process will resume only after August 2. “On an average, around 20 people who visited these Aadhaar card centres had to go back disappointed,” said the source.

To propagate the Aadhaar linking with PAN, messages were sent; advertisements are being shown on TV by the Income Tax Department of India. The taxmen are trying their best to reach out to more and more people through mass media to inform them that to file income tax returns (ITR) it is mandatory to link their PAN with Aadhaar cards.

Sachin Shette, a private tour and travels owner, who worked as a Aadhar card agent said, “After it became mandatory to link Aadhaar and PAN cards to file I-T returns there was a huge rush. But after July 15, the machines were taken by the government to install the GPRS machine. These machines were earlier secretly taken to the homes of several celebrities and VIPs to make their Aadhaar cards, the reason why the government is installing the GPRS in it.”

In Dadar’s Dena Bank, a private firm had rented a cubicle for Aadhaar Card centre, the people were let down as a board hanging on the door read: ‘Aadhaar Card Centre will be closed until further instructions’. When contacted, official from the firm said that the centre was closed due to some internal tension in the management.