In 2008, it was described as a new species based on a detailed study of the museum specimen. 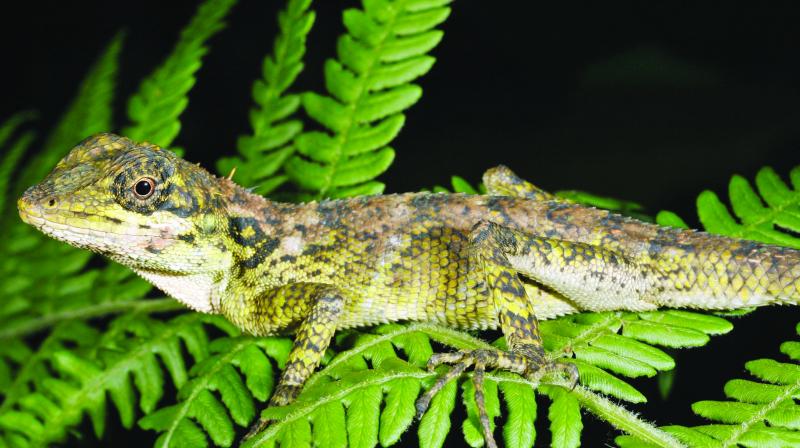 Mumbai: Scientists belonging to the Indian Institute of Science (IISc) and the Bombay Natural History Society (BNHS) have discovered two new species of lizards in the Western Ghats. In a recent study, scientist Saunak Pal (BNHS) and his colleagues from the Centre for Ecological Sciences, IISc, Bangalore, carried a thorough revision of the taxonomy of agamid lizards of peninsular India and revealed the presence of two new genera and two new species of lizards from the Western Ghats.

Four evolutionary groups were found mainly in peninsular India, based on large scale geographical sampling and molecular and morphological studies. Mr Pal, the lead researcher from BNHS said, “For over 150 years since their description, Roux’s forest lizard and Elliot’s forest lizard were considered to be part of the widespread agamid genus calotes. However, we found that they are actually a part of a distinct group of lizards found only in the Western Ghats, which we named Monilesaurus. We also found two new species, Monilesaurus montanus, Montane forest lizard and Monilesaurus acanthocephalus,  a spiny-headed forest lizard belonging to this genus”

The spiny-headed forest lizard is like a ghost among Indian lizards with only a few sightings recorded since its initial discovery in 1997. It was first incorrectly identified as a species of agamid lizard found in the Andamans.

In 2008, it was described as a new species based on a detailed study of the museum specimen.

“We found this lizard after 12 years from the forests of southern Kerala. Our molecular work shows it belongs to a distinct genus, which we named Microauris,” said  Mr. Pal.

This project was carried out as part of a larger survey of frogs, lizards and snakes of the Western Ghats.