Corporators ask for audit of bldgs with hoardings

According to the civic officials, the notice of motion would be tabled in the civic house for approval. 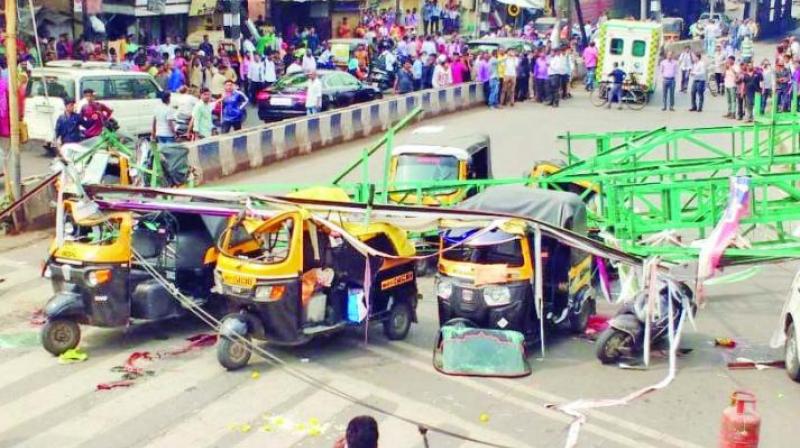 Four people were killed in the Pune hoarding mishap, which happened earlier this month.

Mumbai: On the backdrop of Pune hoarding mishap, corporators have demanded that the Brihanmumbai Municipal Corporation (BMC) should carry out structural audit of all buildings, on which commercial hoardings have been installed.

In a notice of motion tabled before the civic ge-neral body meeting, Bharatiya Janata Party  corporator Sandeep Patel from Goregaon has said that structural audit be done of all commercial hoardings in the city, which are placed atop of buildings and other constructions.

Mr Patel said, “In Mum-bai, several big commercial hoardings have been installed at several places like buildings, railway station area, roads, highways etc. Faced with several factors like light, wind, rains, the structural capacity of these hoa-rdings and buildings gets diminished. It may lead to collapse of these structures resulting in loss of lives and financial damage too. To prevent such incidents, safety measures need to be taken.”

Four people were killed in the Pune hoarding mishap, which happened earlier this month. On October 5, a massive hoarding frame installed on the railway land at Shahir Amar Shaikh Chowk near Juna Bazaar at Pune collapsed while it was being cut, killing four and injuring seven. Six autorickshaws, three two-wheelers and one car were also crushed as the structure fell on them.

According to the civic officials, the notice of motion would be tabled in the civic house for approval and if approved would be sent to the municipal commissioner for an administrative approval.