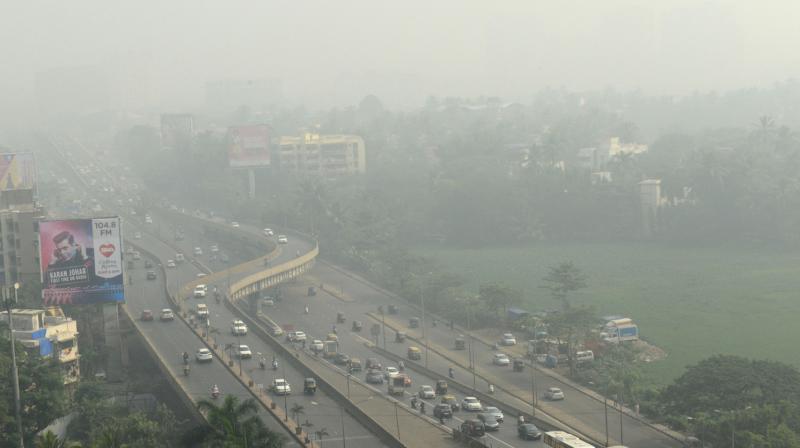 SAFAR predicted an AQI of 304 for today, which comes under the “very poor” category.

Mumbai: Mumbai can’t seem to escape its air pollution woes. The air quality of the city remained in the “poor” category on Wednesday with the air quality index (AQI) recorded as 210, according to the System of Air Quality and Weather Forecasting and Research (SAFAR). Moreover, Navi Mumbai, which has been reeling under an air pollution crisis this month, also recorded an AQI of 285, which also falls under the “poor” category. The SAFAR has predicted an AQI forecast of 304 for tomorrow, which comes under “very poor”.

Although the Maharashtra Pollution Control Board (MPCB) data shows the Navi Mumbai AQI as “moderate”, a look at the AQI trend in December this year reveals that it has deteriorated significantly as compared to December 2016.The Indian Institute of Tropical Meteorology (IITM) attributed the pollution levels to fluctuating wind speed in the city. “The wind speed has picked up pace after Christmas, which has dispersed pollutants at the surface. However, as the speed decreases, pollutant particles get suspended on the surface,” said Gufran Beig, project director, SAFAR.

P. Anbalagan, member secretary, MPCB, said, “There has been consistent fuel conversion in the industrial areas of Navi Mumbai, with many units switching to natural gas. Moreover, the condition of roads and flyovers has improved with respect to dust pollution. The change in temperature and slow wind speed may have led to the decline in air quality.”

For now, there are only two air-monitoring stations of the MPCB in Mumbai, out of which only Bandra station is functional. For Navi Mumbai area, there is an MPCB’s air monitoring station in Airoli. The move is expected to provide a more transparent and effective data on air quality across the city.

“The stations will cover areas from the eastern and western suburbs, including Borivali, Sakinaka, Ghatkopar, Churchgate,” said P. Anbalagan, a member secretary, MPCB.

Right now, 17 districts do not have air-monitoring stations. “This gives Mumbai and suburban areas an additional 17 continuous air-monitoring systems and 57 stationary air quality stations will be set up across the state. We are going to add five more parameters to check the status of air quality in the 57 stations,” added Mr Anbalagan.