According to devotees, while the first fast is usually the toughest, this year the same has become a struggle due to the heat and humidity. 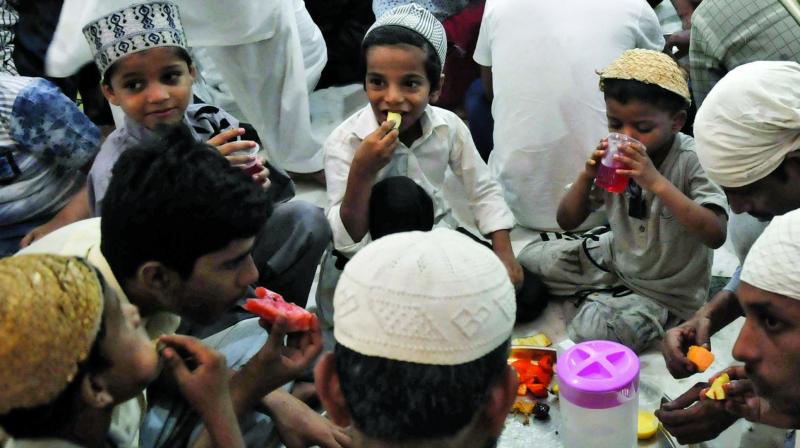 The devotees said that they were trying their best to overcome their thirst in the face of torturous heat and soaring humidity in the city. (Photo: Debasish Dey)

Mumbai: Despite the high humidity and temperatures in the city, lakhs of devotees started Ramzan, the month of fasting on Sunday, trying their best to overcome thirst pangs due to the torturous heat till the time of breaking the fast in the evening. According to devotees, while the first fast is usually the toughest, this year the same has become a struggle due to the heat and humidity.

“Mumbai’s heat is energy sapping and impossible to bear even if you are not fasting. However, as the mandatory act stipulates neither drinking water nor juices or eating from sunrise to sunset, it was difficult to tide over the first day,” said Naeem Shaikh, a resident of Mohammad Ali Road.

He added that unless necessary, he and his family remained indoors to escape the harsh heat. With temperatures touching 32 to 38 degrees and the humidity soaring to 70-80 per cent, the body looses water faster thus leading to dehydration and making fasting even harder.

Doctors said that for devotees who are fasting despite the heat and humidity it would be more erudite to stay indoors and go outdoors only if needed. “The one who intends to fast should keep in mind that the body will lose moisture even if they step out in the sun for a short time. They should have fruits and avoid oily food at the time of breaking fast. In the morning also they should avoid eating meats as the body requires more fluids to digest it,” said Dr A. Badami, a homoeopath from Bandra.

Apart from diet, Dr A Kanadiya from Andheri said, “Those who are fasting should keep their bodies cool by frequently washing their hands and feet. This would help in keeping the body temperature low and avert dehydration.”

The advice of the medical fraternity notwithstanding, devotees have made their own formulae to combat the heat and humidity and fulfil their religious duty. “We have installed water-coolers and water sprayers in our locality to keep the temperatures low during the day.

The constant spraying has ensured that the ground remains cool,” said Zaheer Lakhani, a resident of Kurla’s Christian village.

The Indian Meteorology Department (IMD) has predicted that monsoon will hit the city in June and devotees are hoping that the forecast turns into reality otherwise fasting will become difficult.