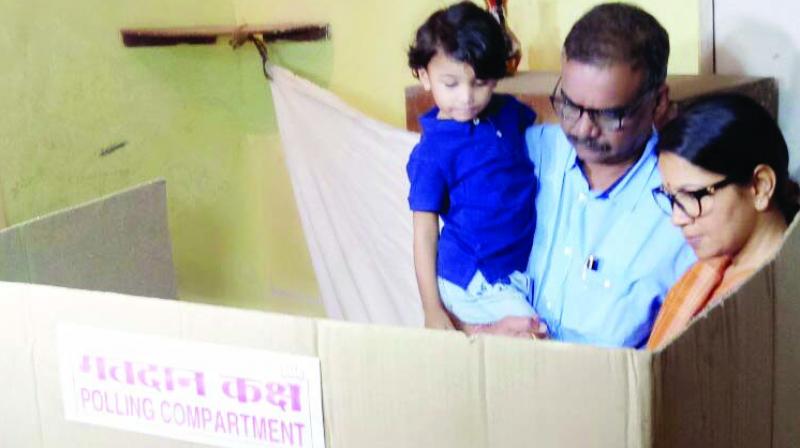 Mumbai: The controversy surrounding the malfunctioning of electronic voting machines (EVM) thickened on Monday in course of the bypolls for Maharashtra’s Palghar and Bhandara-Gondia Lok Sabha constituencies.  Almost 250 EVMs in Bhandara-Gondia and 154 in Palghar seats experienced technical snags as the voting progressed during the day. Reacting to this, the Opposition parties cried foul and demanded a thorough probe. The Election Commission cited the increase in temperature for the mess, which disrupted the voting process temporarily, by 15 minutes to even 120 minutes.

The Bahujan Vikas Aghadi leader Hitendra Thakur levelled the first allegation about the malfunctioning EVMs in Palghar. Early in the day, he stated that there were many booths where voting was yet to take place. “I am getting reports from our workers. There are many locations where voting machines have developed some problem. This is suspicious. The Bharatiya Janata Party (BJP) is trying to demoralise our early-morning voters by resorting to these tactics,” said Mr Thakur.

Congress’ spokesperson Sachin Sawant put up the list of booths where EVM snags were seen around 10 am. By that time, Nationalist Congress Party (NCP) leaders from Bhandara-Gondia too raised questions over EVM issues. “EVMs used in Bhandara-Gondia are brought from Surat, Gujarat where they are manufactured on a large scale. We demand an immediate probe into the issue,” said NCP chief spokesperson Nawab Malik.

Meanwhile, Palghar returning officer Prashant Narnavare clarified that snags were seen in less than 10 per cent of the total EVMs. “Fifteen per cent of the machines are kept in reserve in every Assembly constituency. The Central Election Commission has deployed 96 engineers in Palghar. Fifteen officers have been given the responsibility of each of the six assembly seats (in the Lok Sabha constituency). All the people who have been standing in the queue will be given a chance to vote,” said Mr Narnavare. Abhimanyu Kale, district collector, Bhandara, concurred with Mr Narnavare.

The BJP’s alliance partner Sena, however, also termed the EVM issue a conspiracy by the BJP.