Metros   Mumbai  29 May 2019  Payal Tadvi may have been killed by accused, says her spouse
Metros, Mumbai

Payal Tadvi may have been killed by accused, says her spouse

Salman, a doctor himself, said that there was a possibility that the three female doctors murdered Dr Tadvi. 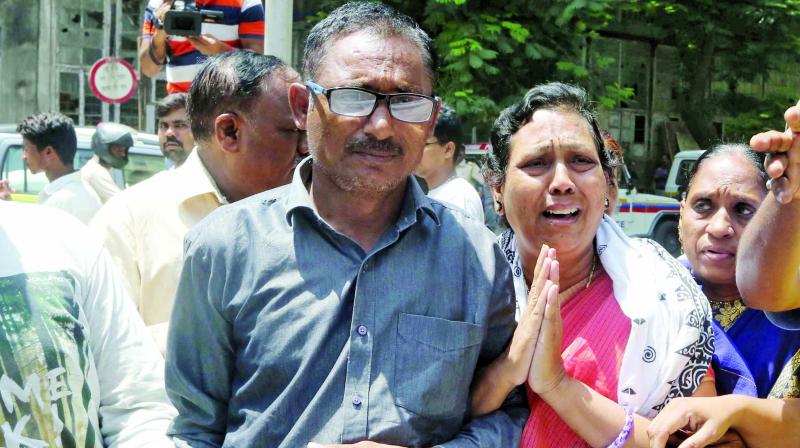 Dr Tadvi’s parents who staged a protest outside the civic-run hospital in Mumbai. (Photo: ASIAN AGE)

Mumbai: Parents of the 26-year-old female doctor, who committed suicide after alleged harassment by seniors, staged a protest outside the civic-run BYL Nair hospital on Tuesday.

Other protesters also joined Tadvi’s husband Salman and mother Abeda, who were demanding “strictest action” against the three female seniors, Ankita Khandelwal, Hema Ahuja and Bhakti Mehare, who allegedly drove her to end her life.

Salman, a doctor himself, said that there was a possibility that the three female doctors murdered Dr Tadvi.

Her husband, Dr Salman accused the hospital authorities for failing to act against the three seniors in December 2018, when she had finally confided in her family about the alleged harassment.

He said, “The head of gynaecology department didn’t take any serious steps despite her compliant. Even after she stated the kind of harassment she was undergoing, no action was taken against her seniors.”

“She was targetted for being from the lower caste and was ragged quite a bit by her seniors. The seniors said they will not let her study. They used to humiliate her on WhatsApp too,” her husband Salman stated.

The hospital’s authority has also suspended the head of its Gynaecology department Dr Yi Ching Ling until further notice.

Abeda, Tadvi’s mother, also said, “Whenever Payal used to call, she would say that the trio tortured her as she belong to a tribal community and also used casteist slurs. We want justice for her and demand strict action to be taken so that next time no one will end their lives.”

The three doctors have been booked under the Atrocities Act, the Anti-Ragging Act and the IT Act and Section 306 (abetment to suicide) of IPC.

The three doctors of Nair Hospital booked for driving their colleague Dr Payal Tadvi to commit suicide, have approached the Sessions court seeking anticipatory bail (ABA). They have claimed that there is no case of abetment to suicide.

According to the applicants, the reason for Dr Tadvi’s suicide was high stress and the same was mentioned in the FIR by her mother as well.

Although the trio of Hema Ahuja (28), Bhakti Mehare (26) and Ankita Khandelwal (27) filed a joint pre-arrest bail plea in the Sessions court Tuesday, the police managed to arrest Dr Mehare the same evening in connection with Dr Tadvi's suicide.

According to the accused doctors, they were not aware if Dr Tadvi belonged to any reserved category.

They claimed that if the deceased was acting in a manner that was inappropriate as a student and trainee, it was expected that she would be pulled up. If she found this too stressful, she could have left the job, they said.

The applicants termed Dr Tadvi's suicide as a “very unfortunate incident” and blamed it on extreme work stress. According to the applicants, the entire atmosphere in government hospitals, with their limited staff and doctors and resident doctors of the stature of the applicants and the deceased, was so charged that persons could not get adequate rest or sleep.

The applicants claimed that the atmosphere was extremely stressful and in one breath, people were expected to be both precise and efficient and in the second breath, there was a huge amount of pressure when the performance was not of the expected level as one was dealing with human lives, particularly involving women and children in the tender state of pregnancy and delivery.

The applicants claimed that in Dr Tadvi’s case, it was clearly one where she had shirked responsibilities from November to December 2018 for almost a month and had suddenly stopped coming to the hospital.

Referring to Dr Tadvi’s mother's statement that she was so busy that she was unable to even have a bath, the applicants put it down to her presence required in the hospital and the high stress that was even mentioned in the FIR by her mother.

The applicants said that if the deceased was labelled as a person who ran away (bhagoda), it could not be said to be any kind of abetment to suicide.