No end to commuters’ nightmare 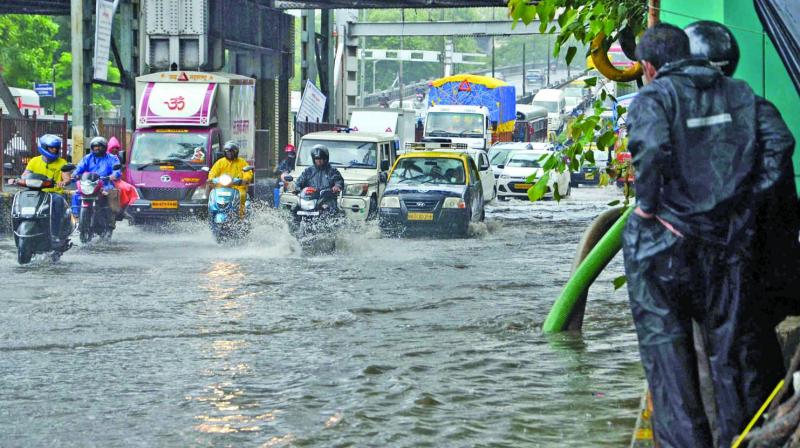 Vehicles are seen driving through the flooded water after a heavy rain fall at Kings Circle, Matunga on Friday. (Photo: SHRIPAD NAIK)

Mumbai: Heavy rain crippled the city’s road, rail and water transport. As traffic crawled along the roads, traffic jams were reported along the Western Express Highway from Kherwadi and Bandra to Vile Parle and beyond. Train commuters took to social networking sites to give vent to their angst. Taxi drivers, as usual, cashed in on the situation and charged inflated rates, especially private cabs.

Due to water logging in suburbs like Andheri, Kurla and Juhu, people went through a lot of hardship while commuting.

Miramma Nair (54), a Borivali resident, said, “I work in a private sector company and my office is near the airport in Andheri. Although I reached Andheri station by train, the more difficult part was to reach the office from the station. No rickshaw driver was ready to come. Somehow I managed to hop onto a BEST bus, but reached office late.”

She said that while she thought of hiring an app-based cab, the surcharge was humongous and the queue was terrible.

Praveen Iyer, a railway commuter, said, “Trains were running late and were halting in between stations. There were no proper announcements from the railway. At least regular announcements should have been made at all stations and in trains so commuters could have known.”

Thousands take boat services at Versova, Manori, Gorai, Ferry Wharf (Bhau Cha Dhakka) etc. to go to Uran, Mora and Alibaug. These services were also affected by the incessant rains. A boat owner Suleman Memon said, “Due to the downpour, our boat service was stopped completely.”