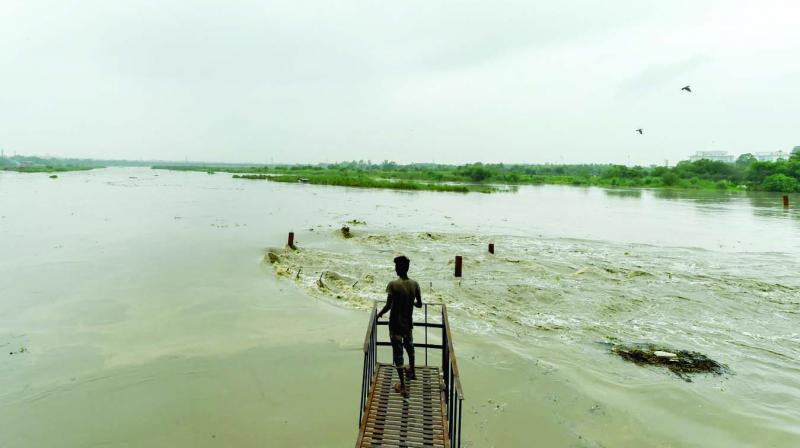 All the departments informed the chief minister that they were prepared and are on alert for any such situation.

New Delhi: With the Yamuna crossing the danger mark, chief minister Arvind Kejriwal on Saturday held an emergency meeting with top officials of his government, including chief secretary Anshu Prakash, and directed all departments to be on high alert.

The meeting was chaired after Haryana released five lakh cusec of water from the Hathni Kund Barrage. It is expected to reach Delhi by Sunday evening.

Mr Kejriwal, his deputy Manish Sisodia took review of the preparedness of the departments in case water enters the low-lying vulnerable areas of Delhi.

All the departments informed the chief minister that they were prepared and are on alert for any such situation. They informed that the quick response teams (QRTs) are also activated for any emergency.

The agencies concerned informed the chief minister that the process of evacuation in the vulnerable areas has already begun and they have started putting up tents to shift the people being evacuated, said a statement from the Delhi government.

The chief minister said the supply of power, food and drinking water must be ensured to the people. Emergency medical teams would also be on duty for the people being shifted for any kind of medical emergencies, the statement said.

The DUSIB has been asked to activate and place their mobile toilet vans around the tents being put up at the earliest. Kejriwal asked the departments concerned to reach out to the people in these areas and inform them about the evacuation and its reasons aggressively.

The education department and municipal corporations have been asked to be ready to provide the school space in these areas for people to be shifted if the situation demands so. The DUSIB has also been asked to chip in with their centres where people can be accommodated if required.

The Army was also requested to be on stand-by for any emergency, they replied in an affirmative and said they are on stand-by.

The availability of motorboats was also discussed. All the agencies having motorboats were asked to keep them ready for evacuation.

The Army has been asked to check all the motorboats for operations, if required. Portable generators are also being prepared for night evacuation, if required.

“The chief minister directed that the Control Room Emergency Number 1077 must be advertised so that it reaches people at the earliest. People in general would be able to call on 1077 for any flood related emergency,” it added.

The water level is expected to cross 205.4 metres on Saturday, officials said.    Mr Kejriwal said all departments have been put on high alert.     “Haryana has released 5 lakh cusec water. Called an emergency meeting to discuss the situation. This water likely to reach Del by tomo eve. Wherever administration evacuating people, they r requested to cooperate. All depts put on high alert. For any flood related emergency, control room no is 1077 (sic),” he tweeted.

The Yamuna water level at the Hathinikund barrage has crossed the danger mark of 90,000 cusec and till 9 pm, 49,2351 cusec of water was released.

The water level of the Yamuna river at the Old Delhi Railway Bridge rose to 205.36 metres by 9 pm and is expected to rise even further, an official said.

“The water level of river Yamuna at Delhi Old Rly Bridge reached at 204.92 metres at 7 am on July 28 (above the warning level) and having rising trend,” a statement issued in the morning had said.

An alert was sounded on Friday by the Delhi government after the water level of the Yamuna crossed the danger mark, an official said.     — PTI

“All executive engineers/sector officers are directed to keep in close contact with the control room in relation to the discharge, water level at the Old Railway Bridge and the advisory or forecast from the Central Water Commission/MET, and requested to take appropriate measures/steps accordingly to avoid flood-like situation,” an advisory from the authorities said.