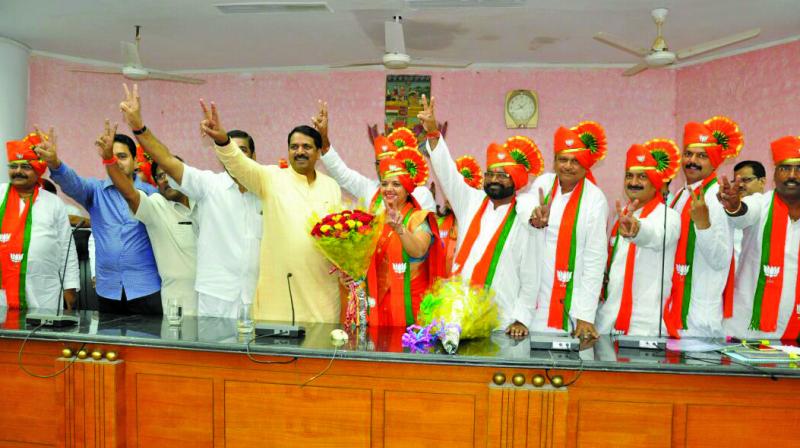 Mumbai: The Bharatiya Janta Party (BJP), which has in the past criticised its rivals — the Nationalist Congress Party (NCP) and the Congress — for indulging in nepotism, has allegedly walked into the dynasty trap. BJP’s two-time corporator Dimple Mehta, who is the sister-in-law of BJP legislator Narendra Mehta, was elected as the seventh mayor of the Mira-Bhayandar Municipal Corporation (MBMC) on Monday. Ms Mehta received 61 votes and defeated Shiv Sena candidate Anita Patil by a margin of 27 votes.

While Prime minister Narendra Modi has lashed out at the dynastic politics of the Congress several times, the BJP president Amit Shah has claimed that the strong internal democratic set up in the party is one of the reasons behind BJP’s success. However, contradicting its statements, the BJP has named sister-in-law of BJP legislator Narendra Mehta, Dimple Mehta as the MBMC mayor.

Shiv Sena candidate Anita Patil bagged 34, including 12 from the Congress members. Dimple Mehta became the fifth woman to be elected as mayor of the civic body with 61 votes.

Chandrakant Vaity of BJP won deputy mayor elections with a similar margin against his Congress rival Anil Sawant. While the BJP had won 61 of the 95 seats in the MBMC elections held last week, the Sena remained a distant second with 22, followed by the Congress with just 12 seats.

Waging a lost battle, the opposition led by Shiv Sena and Congress had teamed up to put up a brave face by fielding mutual candidates. This is the first time; the BJP has won an absolute majority in the civic body, earlier considered a NCP-Congress stronghold.

All the BJP corporators had assembled in the house for electing the mayor and deputy mayor, sporting saffron turbans.

After the municipal council was elevated to the status of a corporation, local NCP strongman Gilbert Mendonca crowned his wife Myra as the first mayor of the civic body. In 2012, Mendonca’s daughter Catleen Pereira and former Congress legislature Muzaffar Hussain’s mother Noor Jahan Hussain occupied the mayor and deputy mayor’s chair respectively. And now, Mr Mehta has also followed the path of dynasty politics. To continue his undisputed hold over the local politics, Mr Mehta ensured that his kin Dimple Mehta becomes the mayor after the BJP’s landslide victory in the recently held elections.