The suspended officials include an assistant divisional fire officer, while the remaining four are from the ward office. 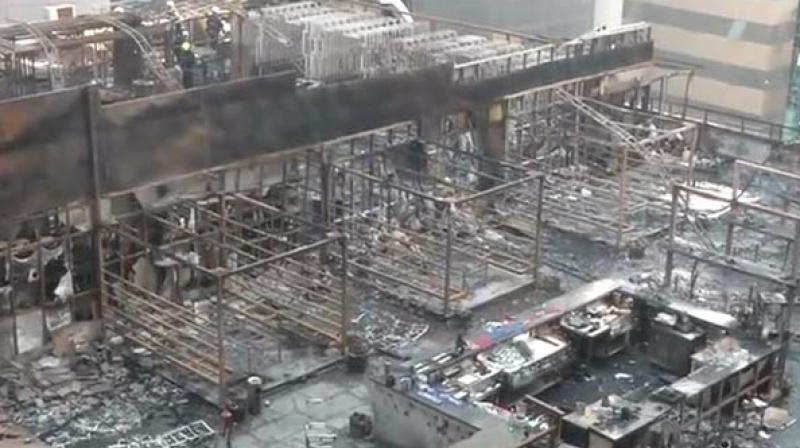 '1 Above' pub where the fire broke that claimed 14 lives. (Photo: ANI | Twitter)

Mumbai: The Brihanmumbai Municipal Corporation (BMC) on Friday suspended five of its officials in connection with the fire in a Central Mumbai pub that claimed 14 lives, a top official said.

The civic body in the recent past had sent a few notices to the joints at the Kamala Mills compound for violation of norms, a senior BMC official said.

Have ordered BMC Commissioner to conduct inquiry. 5 people have been suspended. Action is being taken on the owners, who are also responsible for death of these people. Action would be taken against BMC if negligence is found on their part: Maha CM Devendra Fadnavis #KamalaMills pic.twitter.com/UfHfrPCJg4

The officials suspended were attached to the fire brigade and the G South Ward.

The suspended officials include an assistant divisional fire officer, while the remaining four are from the ward office including engineers and health officials, civic sources said, adding the ward officer of G South has been transferred.

Mumbai mayor Vishwanath Mahadeshwar said an enquiry has been ordered and strict action will be taken against errant officials.

A fire that started at a rooftop pub hosting a birthday party spread rapidly through the building, killing 14 people, most of them women, shortly after midnight in a posh Mumbai locality, officials said on Friday.

The fire, which also injured 21 people, started after 12.30 am in the "1 Above" pub on the terrace, and spread to Mojo pub on the third floor one level below.

Most of the victims, who included 11 women, died of asphyxiation, said Avinash Supe, dean of the KEM Hospital where the injured and dead were brought.