In May, a few commuters aboard the amenities-rich Mumbai-Goa Tejas Express had vandalised some of its accessories. 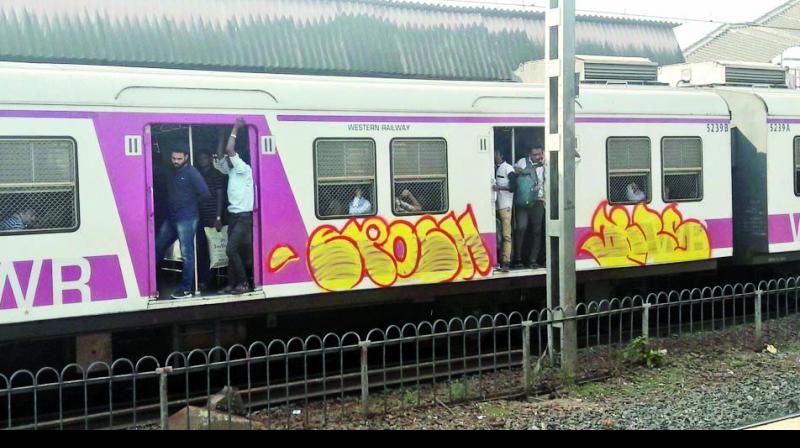 The graffiti spray-painted by an anonymous person.

Mumbai: In a stark reminder of how commuters abuse amenities, a Churchgate-bound Bombardier-make train bore the brunt of vandalism Thursday afternoon.

There was graffiti, by an unidentified person, spray-painted on the bottom portion of the train. Significantly, 72 Bombardier trains were bought in 2016 at a cost of Rs 44 crore per train.

This is not the first such instance. In May, a few commuters aboard the amenities-rich Mumbai-Goa Tejas Express had vandalised some of its accessories in its maiden run.

The WR is now considering action against those who might be responsible, said chief public relations officer Ravindra Bhakar. “The incident is extremely unfortunate and we are trying to find out the culprit. The railway tries to provide the best facilities to commuters by bringing in new trains, by which commuters are to be benefitted.”

Following this act of vandalism, the WR is wary about a similar incident on the air-conditioned train introduced just four days ago. “We are now extremely wary of such an incident happening with the AC train. The train itself is a Rs 54 crore property.”

The WR has already stationed extra railway protection force (RPF) personnel around the AC train due to its high-profile nature.

Commuter activist and ex divisional railway users consultative committee member Normal Tikamgarh expressed his displeasure over the incident, he said, “This is extremely unfortunate as a lot of times we are easily ready to point fingers at the railways when they fail to deliver but when they do provide us amenities we don't respect it or keep it clean.”