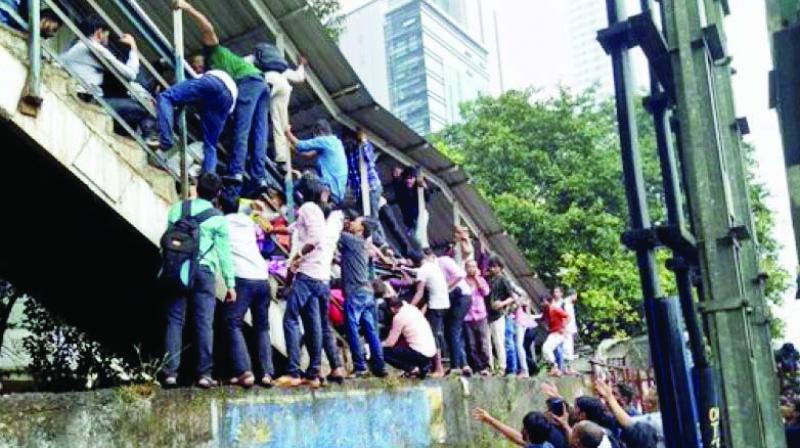 File image of the tragic stampede on September 29.

Mumbai: Three months after the Elphinstone Road station FOB stampede of September 29, which killed 23 people, Western Railway (WR) inducted 232 personnel of the Maharashtra State Security Corporation (MSSC) on Thursday, to ensure better crowd-management during peak hours on the foot-over bridge as well as the platforms. Besides the MSSC personnel, 97 lady homeguard constables will also be part of the new railway team for ensuring better security, especially for women commuters at sparsely-populated stations during non-peak hours, like early morning and late night, officials said.

The additional personnel are being roped in as a measure to control crowds, which was part of a 200-page multi-disciplinary report made by WR after the tragedy. General Manager, WR, A. K. Gupta informed that they have decided to increase the fresh induction of officials so as to lend more strength to crowd management and also security, specially for women during odd hours, based on complaints made and incidents reported.

“We will ensure that the additional forces will help us in managing the crowds on every part of the station during the peak-hours and makes sure that there are no untoward incidents.” He further added, “Some stations are especially less populated, where women are more vulnerable than other stations. These are being chosen based on the complaints and incidents. These additional forces will help us in trying to achieve this goal.”

The new recruits might increase explained Mr Gupta, according to the needs of the commuters. They were  especially brought in after WR realised that they need an increased force. “We had increased our security presence at FOBs and platforms after the officials made the multi disciplinary report but realised we needed more man power.” He further added, “We currently have 995 RPF personnel on our staff in the suburban section and the addition of the 232 MSSC and 97 homeguards is still a 33 per cent increase in our security strength.”