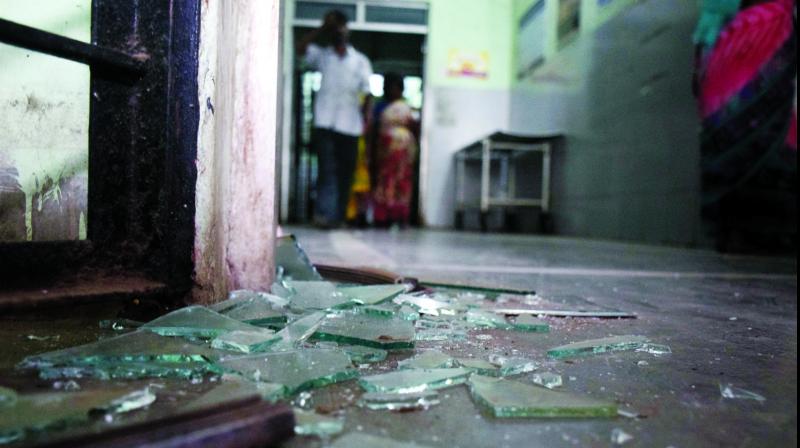 Mumbai: Four days after the state’s 4,500 resident doctors withdrew their week-long ‘mass leave’ stir after being assured of adequate security, three junior doctors were attacked by 20 relatives of a male patient at Thane’s Civil Hospital on Wednesday afternoon. The irate relatives also broke the glass of the main entrance before fleeing the spot.

Thane Civil Hospital, civil surgeon, Kempi Patil said that the Memon had big cut on his hand. “The relatives without giving name of the patient or filling up the form barged inside the emergency room,” Mr Patil said.

He added that the accused didn’t even allow the doctors to insert saline. “Some relatives started telling the doctors how to control the blood flow. When one of the doctors asked the relatives to wait out, Memon kicked the doctor. The other relatives started shouting at women interns and beating two other doctors. They broke chairs and stretchers of the hospital including glass and doors,” Mr Patil said.

The injured doctors have been identified as Dr Javed Shaikh, Dr Salman Khan and Dr Sabi Husain. After running away from the Thane civil hospital, Memon got himself admitted in a private nursing home, where the police are questioning him. He is likely to be arrested after he is discharged from the hospital.

Deputy commissioner of police (zone I) A. Trimukhe said, “Memon had fight with his brother. We have registered an FIR against 20 people and traced Memon. We are taking his statement and further inquiry is on.”