The students lamented that the accused, who was arrested, is now out on bail. 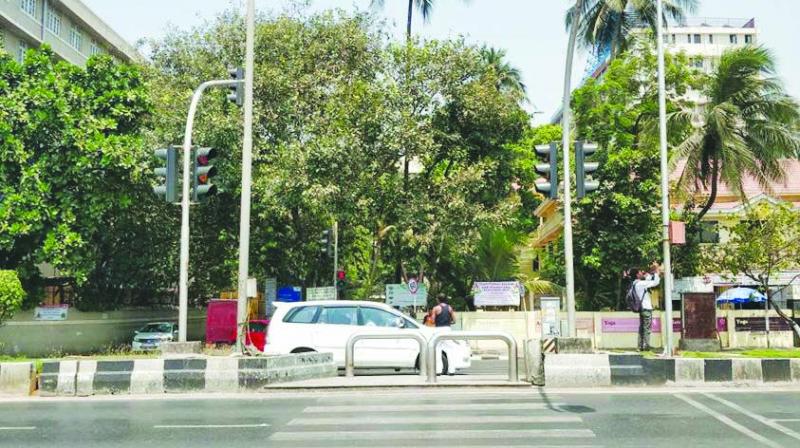 The scene of the mishap.

Mumbai: The students of civic-run Nair Dental College have started a Facebook (FB) campaign, seeking stern action against a Nepean Sea Road resident who allegedly rammed her speeding car into a college intern while the latter was crossing the road near Taraporewala Aquarium on Saturday.

The intern, Dipali Lahamate (22), is at privately-run Bhatia Hospital, has been declared brain-dead. The students lamented that the accused, who was arrested, is now out on bail. The Marine Drive police said it has registered a FIR to probe the complaint.

Ms Lahamate’s batchmate, Dr Manish Padmane, an active member of the FB campaign, said, “The accused is out on bail while my friend is battling for her life.”

Recalling the sequence of events, Dr Padmane said, “Ms Lahamate was happily going for her brother’s convocation at JJ Gymkhana; he has just completed his M.B.B.S. The incident occurred when Ms Lahamate was crossing the road at the signal. Instead of stopping and seeking medical aid, the driver of the Honda City continued to accelerate and tried to flee. A stranger chased her down and managed to catch her at the next
signal.”

Helpful passers-by managed to take Ms Lahamate to Bhatia Hospital, where she is currently on life support and hasn’t regained consciousness after the accident. The accused could not be contacted as her phone was switched off.

A passer-by Yezdi Driver (43), who is eye-witness to the accident, followed the accused and caught her at the next signal. Mr Driver, who was out to offer prayers, saw the accused jumping the signal and fleeing without helping the victim. “I saw the girl. She was not at fault. This lady dashed into her and the poor girl was hit hard and fell on the road, bleeding copiously.”

He added, “I saw her rushing from the spot. I revved my motorbike and followed her to the next signal, asking for police help. After the police reached the spot, we went to Marine Drive police station and after spending a couple of hours, a FIR was registered.”

The Marine Drive police station has registered the FIR under the Indian Penal Code and the Motor Vehicles Act.