The train was packed with commuters when the glitch occurred around 11.55 am. 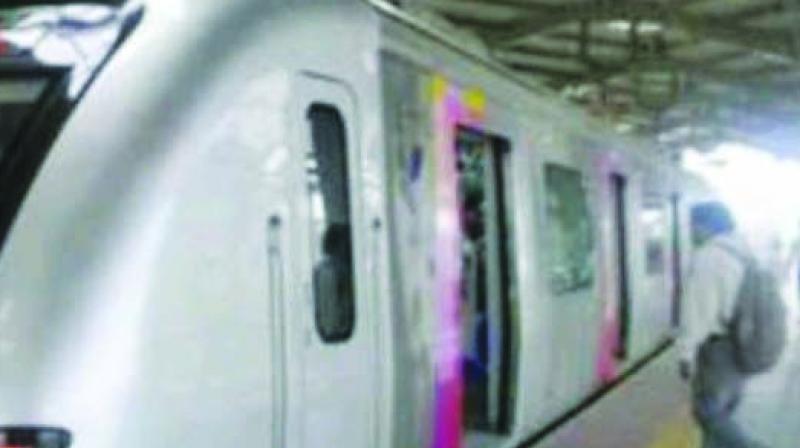 The coach that encountered the snag.

Mumbai: The Mumbai Metro-1 earned another dubious distinction on Thursday morning when the automatic door of one of the Versova-bound coaches failed to close at the Western Express Highway (WEH) station. The train was packed with commuters when the technical glitch occurred at around 11.55 am.

Subsequently, the Mumbai Metro 1 services towards Versova, Andheri were delayed on Thursday afternoon after the snag. The onboard commuters were asked to vacate the coaches. According to officials, the rake was taken to the Metro depot after the incident.

An MMOPL spokesperson said, “Door of a Versova-bound service didn’t close properly at Western Express Highway Station at around 11:55 am today. The
commuters were immediately evacuated and sent by the next service. The affected train was brought to the Metro Depot for detailed checks and repairs if required.”

He further added, “Mumbai Metro-1 has an on-time performance of 99.9 per cent since inception.” Due to the technical snag, the train was immediately sent to the depot for maintenance work.

The 11.4 km-long Metro-1 line which connects Versova in the western suburbs to Ghatkopar in the eastern suburbs via Andheri is operational since 2014.

The rolling stocks which were purchased from a Chinese firm had witnessed technical failures in the past.

Last year in June, a technical snag in the overhead equipment between DN Nagar and Versova stations had caused delay to several commuters.

Previously that year, in February, technical glitches related to the overhead wire led to commuters being stuck between Versova and Ghatkopar and also Azad Nagar and Andheri stations. The services were disrupted for over two hours.