Mercury rises to 35 degrees on LS election day in Mumbai

The minimum temperature was recorded at 28 degrees over last 24 hours. 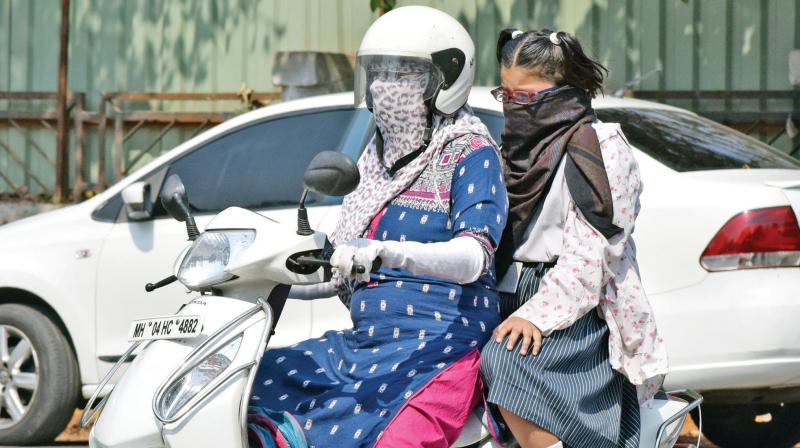 Mumbaikars grappled with heat on Wednesday as the mercury rises. (Photo: Deepak Kurkunde/File)

Mumbai: The polling day turned out to be hot and humid as the maximum temperature soared up to 35.5 degrees Celsius on Monday.

The minimum temperature too was recorded at 28 degrees over the last 24 hours, which led to sweltering weather in Mumbai. As such, crowding was seen at various election booths like Worli, Dadar and Parel, Mahim, Bandra, Khar in the morning and evening as compared to the afternoon.

The Indian Meteorological Depart-ment (IMD) had earlier stated that Mumbai may see hotter days this week owing to the warmer easterly winds. “The cooler sea breeze are also settling late in the evening due to which the days are comparatively hotter,” said an IMD official.

“Although we have holidays, we have come in the morning due to the scorching heat during noon time. We have been standing for an hour in this hot weather to vote, as the queue is very long,” said Sumit Kamble, a resident of Borivali East.

The humidity levels were also recorded at 92 percent, which made the weather sweaty and hot at the same time.

According to the civic and state run hospitals there were few cases reported due to heat problems but none of them were serious. The city based state and civic run hospitals have already started treating the dehydration cases in their OPD's.

Dr Ratnakar Kamat from the JJ hospital said, “We had around 100 cases due to heat related aliments.”

The joint director of the Directorate of Health Services, Dr Mukund Diggikar, “We have already started specially OPD to treat heat wave related conditions, we have fair set up to tackle cases related to heat wave.”

Dr Diggikar also added, “There are no serious cases reported due to heat related disorders in Mumbai, there were few cases reported but treated with Out Patient Department.”