Sanap, who photographed these spiders from Mumbai, said, “Spiders, as a group, are understudied. 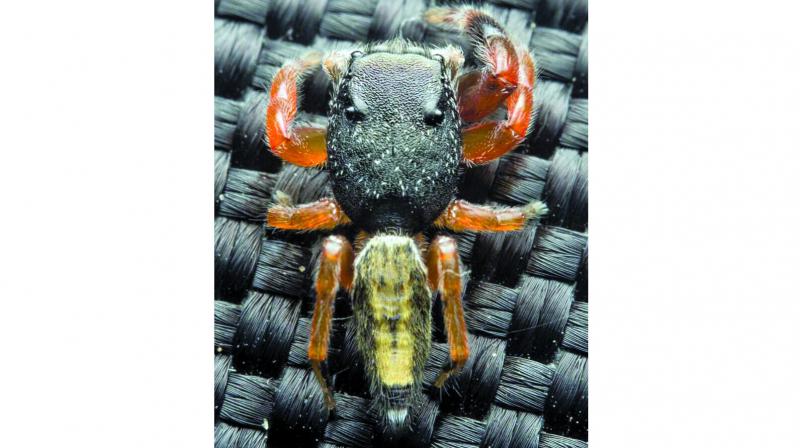 Piranthus Decorus, the spider that was rediscovered.

Mumbai: A new jumping spider species — Piranthus Decorus — was rediscovered in India after 122 years at Aarey milk colony, Goregaon east. The research on rediscovery of the species was conducted by John Caleb and Rajesh Sanap at the National Centre for Biological Sciences, Bengaluru. Sanap had photographed this spider at Aarey colony in the city in 2015. During surveys carried out in 2016, a female of the same species was discovered from the same locality.

After extensive microscopic observation of morphological characteristics, the species was identified as Piranthus Decorus aka jumping spider. Jumping spiders comprise 13 per cent of the global spider diversity, and the family Salticidae under which they are classified is the largest family of spiders. Jumping spiders can be recognised from their peculiar eye pattern; they exhibit the best vision among arthropods. They get their name from their habit of hopping over long distances, facilitated by strong forelegs.

Sanap, who photographed these spiders from Mumbai, said, “Spiders, as a group, are understudied. Aarey colony would be an ideal habitat to explore the spider diversity. More extensive surveys need to be carried out to draw attention to the diversity of this group.”

Considering that several species have been discovered or rediscovered from Aarey colony in the recent past, we certainly expect more discoveries from this forest.”

Sanap is an independent researcher based out of Mumbai. He is involved in documentation of the biodiversity of Aarey colony and has been working on the human-animal interaction in urban areas.