SGNP loses its second valuable tiger after death of Bajirao earlier this month. 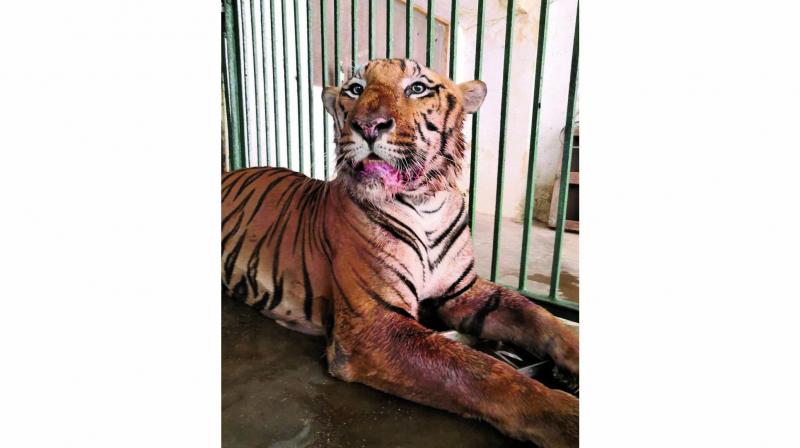 Yash, the 12-year-old star attraction of SGNP who passed away of a rare cancer on Tuesday.

Mumbai: Yash, a 12-year-old royal Bengal tiger died of an extremely rare cancer on Tuesday. He used to be the star attraction for tourists visiting the Sanjay Gandhi National Park (SGNP). With his death the SGNP lost its second valuable tiger in a month, as ‘Bajirao’, the last captive white tiger at SGNP died a natural death earlier this month.

According to a senior official of SGNP, Yash breathed his last at around 5.45 pm on Tuesday. Yash was born to tigress ‘Basanti’ and tiger ‘Palash’ at SGNP in 2008.

Anand, Yash and Laxmi the tigers at the SGNP, are the cubs of Palash and Basanti. The authorities had also brought tigresses ‘Bijli’ and ‘Mastani’ from Pench in Madhya Pradesh to mate them with Yash and another tiger Anand.

As per the report of pathologists from the Bombay Veterinary College, Yash was diagnosed with embyronal type cancer ‘rhaddomyosarcoma’.

The authorities had taken stock of his condition and had operated him twice in the last one year for a growth on his face. Yash was last operated upon in March 2019 by a team of veterinarians led by Dr. Wakankar, Dr. Pingle and others.

According to SGNP officials during post-operative treatment since March, Yash had lost considerable amount of weight. The tiger succumbed to the ailment-related complications like the loss of body condition and multi-organ failure. Since the past two-three weeks, Yash was consuming a limited amount of food and had lost a considerable amount of body weight.

Post mortem of the carcass was conducted at the pathology department of the Bombay Veterinary College. Now Dr Santosh Gaikwad is likely to conduct taxidermy on 'Yash'.

As far as the lone captive white tiger Bajirao was concerned, he was suffering from chronic ankylosis on its left shoulder and chronic senile generalised arthritis for the last four years. He had been unable to walk for ten days prior to its death.

Bajirao was born at the SGNP in 2001 to Renuka and Sidharth. He was the last surviving white tiger in the park. However, due to unsuitable skin condition taxidermy could not be conducted on Bajirao.