Buses, trains no match for the rains

With railways and roads waterlogged, communters found themselves stranded. 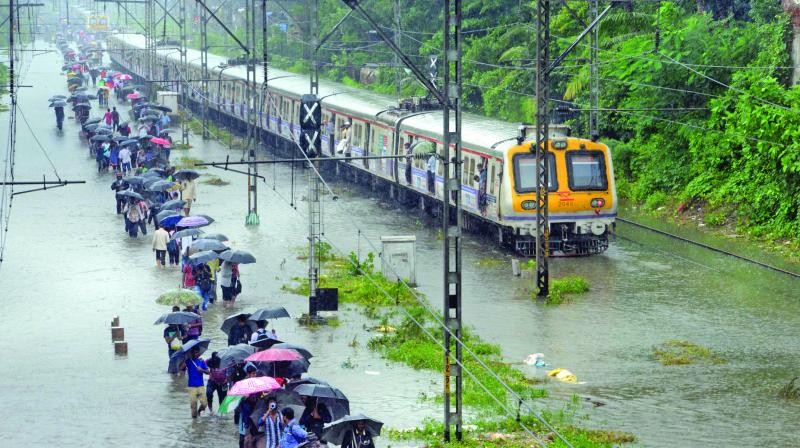 As trains came to a stop, commuters had to walk on the tracks. (Photo: Rajesh Jadhav)

Mumbai: Around 40 percent of the services both on Western and Central Railway did not run on Tuesday, due to severe water logging at Kurla, Matunga, Sion, Vadala stations. It was not just  the railways, but even road transport took a hit as vehicles could not move beyond a point due to the rising water levels. The Brihanmumbai Electric Supply & Transport (BEST) on the other hand deployed its entire fleet and called in every driver and conductor for duty but issues due to water logging and traffic.

The Central Railway (CR) saw more than 700 services on both its Harbour and mainline cancelled while Western Railway (WR) saw around 100 services cancelled and even more delayed. The problem started at around noon when incessant rains lead to tracks flooding as a result of which multiple signals went of the grid causing the railways to halt operations.

The water level on the tracks kept rising further, eventually reaching to only a few inches shy of the platforms. Problem areas like Sion, Kurla, Matunga, the traditionally low-lying areas, were badly hit. CR and WR services took a major hit  due to waterlogging between Elphistone Road and Dadar. An official said, “Services from Churchgate could not go beyond Elphinstone and those coming from Virar were stuck at Dadar.” The official further added, “We have no option but to wait for the high tide to recede and only then will the water levels come down so that we can run the trains.”

The CR had claimed that around 70-tonne worth of trash and slush had been removed from their line in the form of monsoon preparedness and heavy duty pumps to throw out the collecting water were laid. But both failed miserably on Tuesday.

CR chief public relations officer Sunil Udassi said, “The combination of high tide and continuous rain led to the break down in services. We are working towards starting services for commuters as soon as we can and are monitoring the water levels.”

Many people took recourse to the road transport to find a way out, but due to the heavy flooding that BEST was unable to run their bus service, as the arterial roads across the city like BKC-Kurla,  Jogeshwari Vikhroli Link Road, DN Nagar entire Sion, Pratiksha Nagar, Eastern and Western Express Highway, Sion-Panvel highway and LBS Marg, Peddar Road and even Worli Sea link was closed for a some time. One of the affected commuters, Prajakta Shinde said that she had left Nariman Point  at 1 pm after the red alert on the downpour from the state was sounded. “I was told that I should take a bus instead of a train. I took a bus from the after almost three hours from the CST. People were jostling with each other to get into the bus and I didn't want to get injured.”

A watery hell for commuters

Commuters, who were stranded on the streets during the Tuesday’s day-long downpour, had a tough time getting taxis as several drivers were reluctant to drive on flooded streets. Water-logging also rendered many cars non-operational and they were parked haphazardly on roads, adding to traffic woes and creating bumper-to-bumper queues on streets like Dr B.R. Ambedkar Road, LJ Road and Senapati Bapat Marg in the city, and Linking Road and SV Road in the western suburbs.  App-based aggregator cabs like Ola and Uber, which usually make a killing during times of traffic chaos, were not available in flooded areas like Kurla, Sion and Matunga and suburbs like Thane, Andheri and Vashi. Zaid Ahmed, a resident of Kurla, wanted to reach home from south Mumbai but got stuck. He said, “I left from CST at 2.30 pm and reached home at 6 pm, there were no trains available and I was stuck for hours in an already delayed train.” He added, “I even tried to find an Ola or Uber, but nothing was available.”

Some commuters had been waiting for hours at CST and Churchgate stations for the train services to resume. Alekh Angre, a Kalyan resident who was seen standing at CST station, said, “I have been just waiting for a train for almost six hours now. Trains between Thane and Kalyan are running. Even if I get to Thane somehow, it will be okay.”

Some commuters who were aware of the waiting rooms at CST camped over there. “The new waiting room at the end of platform no 16 has been overbooked. We are letting people stay free of cost and they are sleeping on the floor here too,” an official said.

Motorists who thought they had an edge over others were in for a rude shock as the cars stopped functioning due to the rising water levels, forcing many to abandon their vehicles. One such motorist, Prakash Subramanian, who had taken his car to work in the morning, said, “When I reached office in the morning, we discussed leaving for home should the downpour continue.”

Recounting his ordeal, he said, “I thought I’d drive through Wadala and then the freeway because it sees fewer vehicles. But 20 minutes later I was compelled to get out of my vehicle as water was pouring into my engine. I am still waiting for a pickup truck to take my car.”