That was the day 12 years ago when at least 500 people were killed, some electrocuted, other crushed under falling walls or drowned. 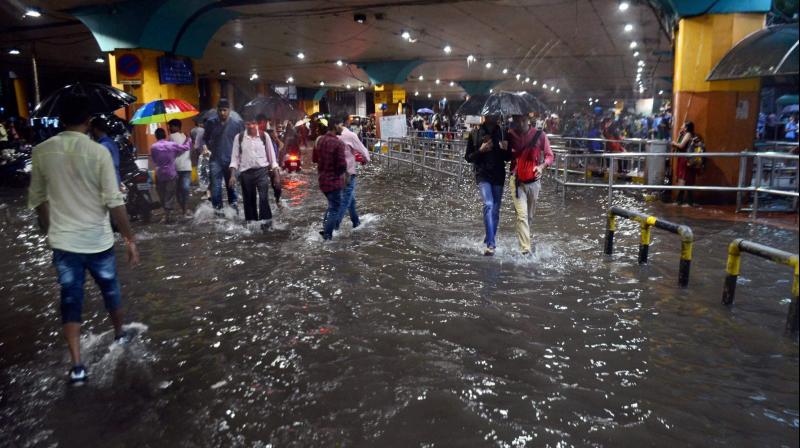 Mumbai: As the skies opened up and a city scurried for cover from torrential rain and high waves that came flooding in from the sea, memories of July 26, 2005 came back to haunt Captain Shivraj Mane, a Merchant Navy officer.

That was the day 12 years ago when at least 500 people were killed, some electrocuted, other crushed under falling walls or drowned, with 94 cm of rain in a single day. That was also the day that Mane, like thousands of other Mumbaikars, began walking home through the flooded streets of Mumbai and its suburbs.

He reached home in the distant Mumbai suburb of Ambarnath only on the third day.

Being a navy man, he was used to water. But nothing had prepared him for the nightmare that was to come.

He waded, "sans protection gear very unlike a naval officer", rode a buffalo on waterlogged stretches and saw human carcasses floating by, images imprinted vividly in his mind.

It's a terrible sense of deja vu, said the 31-year-old, reliving the day that every citizen of the Maximum City remembers with dread.

"It was raining like any other monsoon day that day in Mumbai and Thane when I took a morning local train for Nerul (in Navi Mumbai) from Ambarnath for some official work," he recalled.

By afternoon, he was done with work and should have been home in about two and half hours. It took two and a half days instead.

"I was preoccupied with work and didn't realise what was happening outside. I realised only much later. I took a train from Nerul railway station on the Harbour Line, but it could not proceed beyond Tilak Nagar station, on my way to Kurla from where I had planned to take another local train for Ambarnath."

So he chose to walk like other co-passengers along the track. When they reached Kurla, the magnitude of the destruction hit them. The railway tracks and platform had disappeared under water.

"I opted to stay that night on a foot over-bridge like many others. I was stuck, but at a safer place. I, however, could not contact anyone at home to tell them about my whereabouts as my phone died. We were without food.

"Sensing the magnitude of the calamity, the locals offered the commuters khichdi. That's Mumbai for you!"

The next morning, on July 26, it was still raining and Mane walked on to Thane, 21 km away from Kurla. He was planning to reach Ambarnath via the Thane-Kalyan-Vithalwadi- Ulhasnagar route.

"I did not opt to walk along rail tracks as the road was less waterlogged and a bit safer. Wherever and whenever it was possible, I took lifts to reach Thane and from there again covered a distance of around 25 km to reach Kongaon (in Kalyan taluka) by road."

On his way to Ulhasnagar, he could see buffaloes coming out of a shed that had gone under water.

"I rode one of the swimming buffaloes to cross the river and waterlogged roads to Vithalwadi. When I reached Ulhasnagar from Vitthalwadi, I could see dead bodies of slum dwellers living near a nullah floating in the water. It is a sight I will never forget," Mane said.

"They died in the worst possible way water can kill anyone. All day I travelled by road to reach Ulhasnagar, where I took a shelter at a friend's place. I was drenched and exhausted."

Mane managed to get his phone charged from an inverter in a caf? and speak to his parents.

The rain stopped only on the morning of July 28. He got home, covering the last bit of the distance in an autorickshaw.

"I had lost all my key documents, including passport during that period. My shoes got torn, my legs were swollen. It took next eight days for my feet to recover.

"Those were the two toughest days of my life. I just pray there is no repeat of the rains and the miseries."

It was a wish many other Mumbaikars echoed fervently.