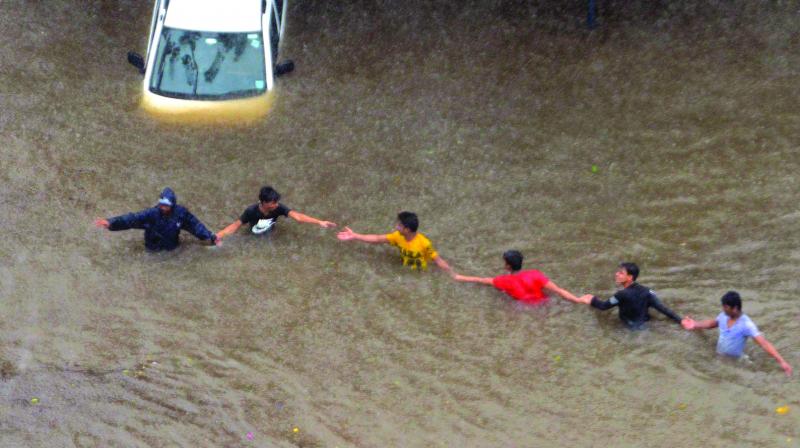 Mumbai: In a stark reminder of the deluge that engulfed the city on July 26, 2005, the Maximum City came to a complete standstill on Tuesday when an unabating downpour lashed Mumbai, inundating roads, causing traffic snarls and stranding commuters. The impact on the city’s residents was no less.

Her parents, Gopal Jangam and his wife, sustained injuries in the collapse as well. The deceased’s parents were admitted to the Rajawadi hospital.

All transport links — road, rail and air — were badly hit amd the showers threw regular life out of gear, with several parts of the city getting flooded; water entered homes and hospitals; and hapless people were left stranded across the city. According to the India Meteorological Department (IMD), the Santa Cruz weather station recorded 88.4 mm of rainfall in the suburbs in the past 24 hours.

The Colaba weather station recorded 151.8 mm rainfall in the same period. The Brihanmumbai Municipal Corporation automatic weather stations reported that from 8 am to 6 pm, the city area got 173.4 mm rainfall, while the eastern and western suburbs saw 193.85 mm and 192.77 mm of rainfall respectively. Weather officials believe this is the heaviest and longest bout of rain since July 26, 2005, when the city was ravaged by floods. The meteorological department has also predicted “extremely heavy rainfall” in the next 24 to 48 hours on the western coast of the state, including Mumbai, and some other areas. As the rain’s fury kept rising on Tuesday, it had a huge impact as several low-lying areas like Sion, Chunabhatti, Pratiksha Nagar, Hindmata, Chembur, Dadar TT, Matunga, Maheshwari Udyan, Parel, Mahim Subway, Prabhadevi, Bandra, Kurla, Vidyavihar, Powai, Santa Cruz, Juhu, Malad went under water quickly. At many places, the water rose up to the waist level. “It looked like 26 July had revisited the city. There was water everywhere in central Mumbai. The entire Sion-Parel belt had gone under water, making residents jittery. The rising water levels added to their fear. In Parsee Colony and Matunga, water entered several houses,” said civic activist Nikhil Desai from King’s Circle. All major roads like the Western Express Highway, Eastern Express Highway, Jogeshwari-Vikhroli Link Road, Santa Cruz-Kurla Link Road, Babasaheb Ambedkar Road and Lal Bhahadur Shastri Road saw huge traffic jams. At several places, vehicular traffic was diverted due to waterlogging. South-bound traffic towards Matunga was diverted to Wadala due to the waterlogging on Eastern Express Highway at Amar Mahal Junction, S.G. Barve Road and V.N. Purav Road in Chembur.

The BMC authorities urged people to stay indoors, but it was too late for most, who had to wade through dirty brown water to their offices. At some places, vehicles could barely be seen above the water line. There were also the only-too-familiar sights of thick branches nestling on shattered windshields or dented car tops. As the meteorological department warned that the Mumbai rains would continue for the next 24 hours, many offices sent staff home early. In the afternoon, traffic was closed on the Bandra-Worli Sealink due to heavy waterlogging at its Worli end. Poor visibility and high velocity winds further made the sealink unsafe as motorists complained of cars getting buffeted around by the wind. As the waterlogging was cleared and visibility improved, the traffic police finally allowed vehicular movement on the sealink by the evening. Also, due to heavy winds and downpour since the morning, the airport saw many flight getting disrupted. Airport officials said that six to seven flights had to do go-arounds while landing, and four to five flights were diverted to nearby airports, including an IndiGo Guwahati-Mumbai flight to Ahmedabad. The single runway of the airport was, however, functional. A Chhatrapati Shivaji International Airport spokesperson said there was an average delay of 35 minutes. “Heavy rains and the strong winds drastically reduced visibility to very low levels, leading to diversions and go-arounds even though the main runway is open,” he said.